When Matthew “Nick” Gomberg finished his undergraduate degree in journalism from Temple University in 2015, he didn’t want to set foot in a classroom again. Gomberg, blind since birth, felt he gained the full college experience.

However, some post-graduation soul searching left him with a few unanswered questions: Namely, did he really want to pursue a sports writing career that would likely lead him far away from his comfort zone of Philadelphia?

“I spent a lot of days doing nothing and looking at different jobs that just made me anxious,” the 27-year-old admits. “There were so many things left I had to answer.”

A 2017 meeting with former Philadelphia University President and Jefferson Chancellor Dr. Stephen Spinelli—coordinated by a mutual friend of Gomberg’s mom—shook him out of the doldrums and set him on a new path.

Originally scheduled for 15 minutes, the meeting with Dr. Spinelli stretched to an hour. And rather than just discuss some basic web accessibility consulting work (a job he did at Temple), Dr. Spinelli floated the idea of coming to Jefferson for his master’s degree.

Intrigued, Gomberg had a follow-up conversation with University Deans Henry Humphreys, Michael Leonard and Ron Kander and, notably, Neil Harner. The director of the MS in User Experience and Interaction Design program quickly became one of Gomberg’s closest allies when he decided to scrap journalism and enroll at Jefferson.

“Everything is getting more and more sophisticated—all these layered graphics and buttons that blink and disappear—which honestly means it’s getting less and less accessible,” says Gomberg, who uses a screen reader on his phone and computer. “We have to figure out how we can have a balance between making it look cool for sighted people but also not hindering your customer base by making it inaccessible. That’s why I did this UX degree. I want to provide this perspective to as many developers, designers and people as I could.”

Facility and fellow students quickly embraced Gomberg as he helped the Jefferson community better understand disabilities and how to best serve all people, Harner says. “He probably taught as much to the people around him as the University taught him.” 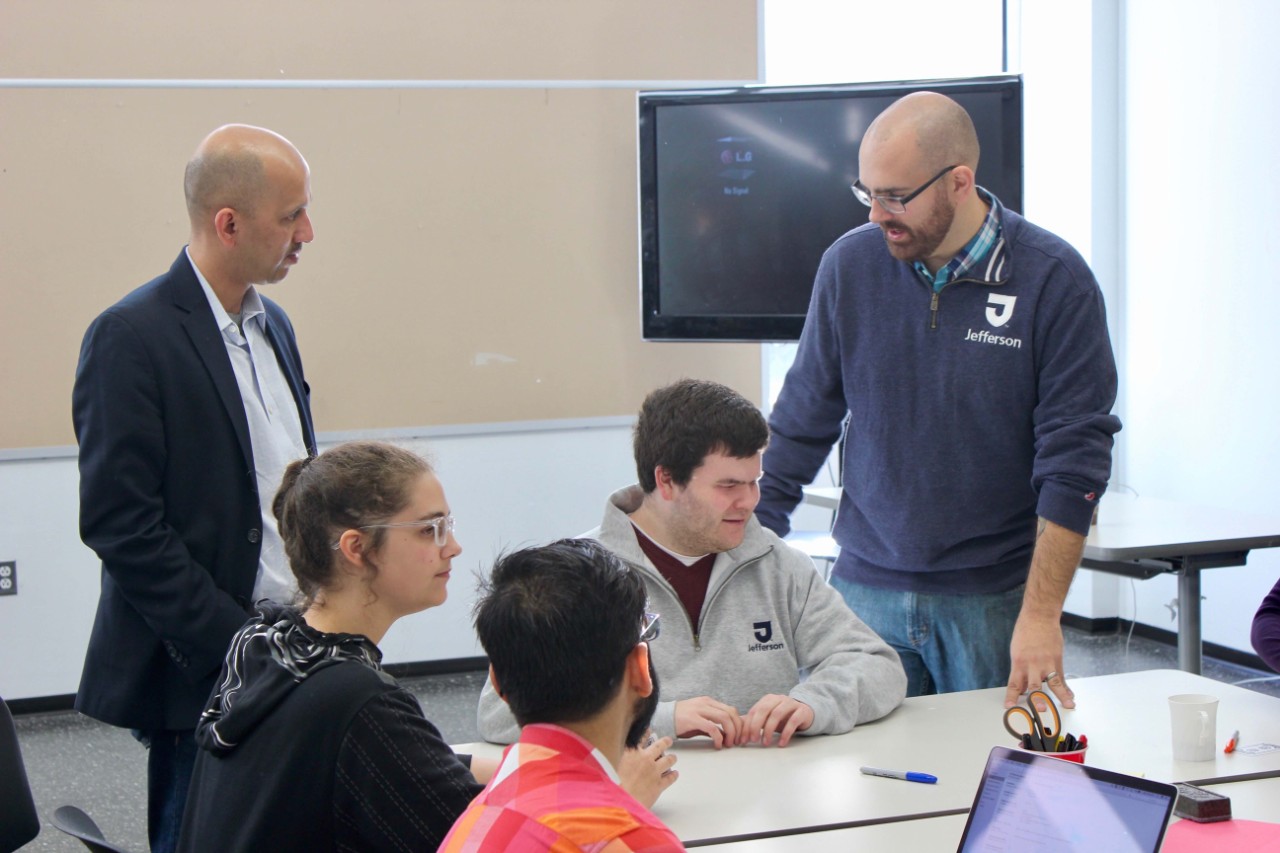 Nick Gomberg collaborates with students and faculty during one of the MS in user experience and interaction design program’s Saturday intensives.

A Guide to Others
Taking Lyfts from his Fairmount home to East Falls Campus, Gomberg not only excelled in his required UX classes, but he actively participated in courses outside his major. For example, in an industrial design ergonomics project on the principles of universal design, he enthusiastically guided the group on equitable use.

“Nick’s unique point-of-view was exactly what the students needed to design beyond their normal experience,” says professor Adam Louie, who taught the course. “He answered questions about what it was like to be blind and how he perceived the things we take for granted. He then acted as a consultant to advise students on what worked and what didn’t in their designs and suggested ways to make them better. Nick often said to me, ‘This is what I want to be doing’ in regard to working hand-in-hand with designers to make more equitable products.”

As for his own courses, Gomberg says he thrived by working with Harner and eventually became his graduate assistant. In fact, to rousing applause, Harner escorted Gomberg across the stage when he received his degree at the Kimmel Center in May.

“He would set my mind going, and I would take it from there,” says Gomberg, a lifelong music fan and a capella singer with perfect pitch.

For his senior thesis, he developed Eye Notes, music notation software that will allow blind and visually impaired people to digitally compose music, as well as gain better access to existing written music.

“Music is an auditory activity that’s exceedingly important within the blind community,” he explains. “There are a limited number of digital products that allow blind people to create and read music independently using screen reader adaptive technology.”

The thesis received top marks from the reviewing panel, shares Harner, who describes Gomberg as an extremely hardworking and engaged student throughout his two years at Jefferson.

“Having someone like Nick learn to design products for people who are blind means there’s potential opportunity to surpass the quality of products we have today,” he says. “I do sincerely hope that as his career and skills develop, he becomes a leader.”

Gomberg thanks Jefferson for the opportunity yet remains humble about his accomplishment. “I feel like I’m just a guy who doesn’t have sight who finished his master’s degree,” he says. “I think that’s pretty cool, but I’m not going to sit here and say I’m an inspiration. I view this as a way to bridge the gap of information between sighted and blind people.”

With degree in hand, Gomberg now looks to use his UX abilities to help an organization’s accessibility efforts, from the beginning stages of product creation through to its release.

“I want to make it intuitive for any user but always keep accessibility in mind,” he says. 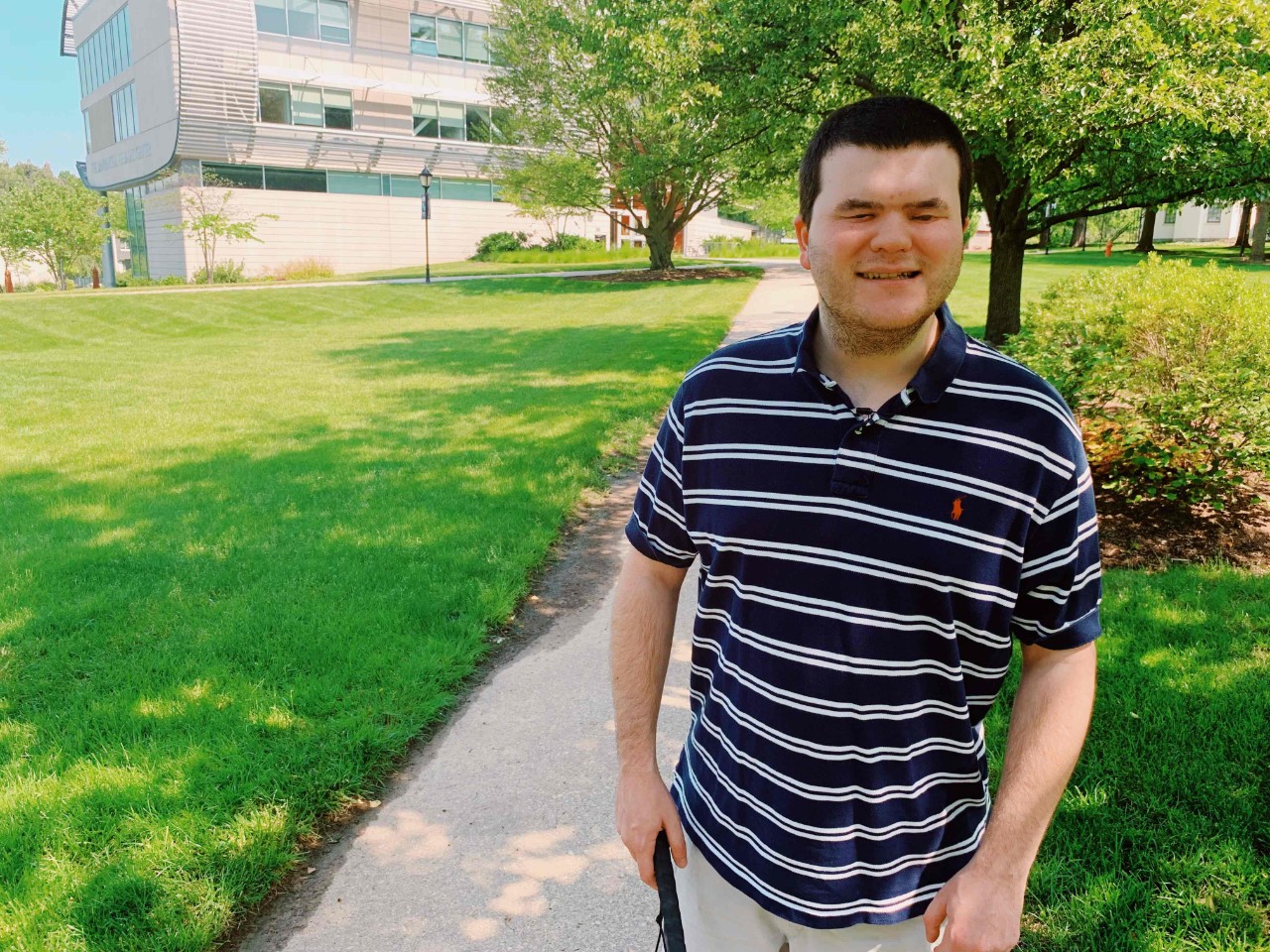