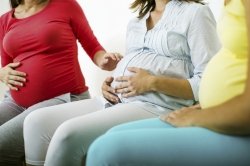 A routine screening could help narrow the estimated date of delivery

(PHILADELPHIA) – To the frustration of busy pregnant women everywhere, estimates of when she'll actually give birth can be off by as much as two to three weeks, early or late. This leaves women with a window of more than a month in which carefully laid plans can be thrown into disarray, with only 5 percent of women delivering exactly on their due date. A new meta-analysis suggests that one routine screening test could help mothers narrow that window to seven days from the time of the test, in research published October 28th in An International Journal of Obstetrics and Gynaecology (BJOG).

Until now, measuring cervical length has been used to help detect women with a high chance of premature labor – the shorter the cervix, the more likely labor is imminent. Since the method is considered the gold standard for detecting preterm birth, a number of researchers have investigated whether it could be used to help predict birth at term as well. The results have produced debate in the field, with some studies showing poor predictive value, others showing stronger value. The aim of the current analysis by Dr. Berghella and colleagues was to pool the data from comparable studies using transvaginal ultrasound to test cervical length and come to a consensus on the topic.

The researchers pooled data from five prospective studies, including 735 women with single-child pregnancies who had babies in the proper head-down position. The researchers found that when the cervix measured more than 30 millimeters at a woman's due date, she had a less than a 50 percent chance of delivering within seven days. However, when the cervix measures 10 mm or less, women had more than an 85 percent chance of delivering within seven days.

Cervical length is a good predictor of labor because it tracks the natural progress of a woman's body toward labor. When a woman's body prepares for labor, a number of changes start to take place. The cervix, which has kept the baby from descending down the birth canal for the nine months of pregnancy, begins to soften. It changes its usual cone shape – imagine an ice cream cone held upright – to a shorter cone, whose top becomes flattened out against the curve of the uterus. When this process begins too early, it signals the start of preterm birth, which, when caught in time can be delayed with certain medications.

"Women always ask for a better sense of their delivery date in order to help them prepare for work leave, or to make contingency plans for sibling-care during labor. These are plans which help reduce a woman's anxiety about the onset of labor," says Dr. Berghella. "But having a better sense can also help obstetricians provide information that could help improve or even save a mother or baby's life," adds Dr. Berghella. Women with a higher risk of stillbirth may be better off receiving a labor induction if the cervix is still long at her due date, since the chances of timely spontaneous birth are low, for example.

The authors declare no conflicts of interest.