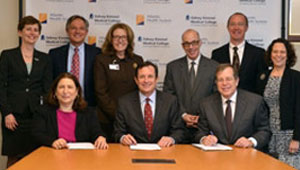 (PHILADELPHIA) – The Sidney Kimmel Medical College (SKMC) at Thomas Jefferson University has entered into an agreement with Atlantic Health System to establish a branch campus at its hospitals in Morristown and Summit, New Jersey. Starting in July 2018, a group of students will have the opportunity to complete their third and fourth years of clinical training at the new SKMC/TJU-AHS Branch Campus.

Students enrolled in this program will participate in a longitudinal integrated curriculum, a unique program in which students follow a panel of patients throughout their clinical training – an approach that differs from traditional rotations and reinforces continuity of care and patient-centered treatment.

SKMC and Atlantic Health System have had an affiliation since July 2015 in which students have had the opportunity to select third year clinical rotations at Atlantic Health System’s Morristown Medical Center in Morristown, and Overlook Medical Center in Summit. While the SKMC/TJU-AHS Branch Campus will be based at these two hospitals, the students’ training will also take place throughout the health system. The birth of the branch campus further strengthens the relationship between the two organizations, allowing for a greater impact on the education of these students.

“We have had a positive and fruitful working relationship with Atlantic Health System and we are thrilled to enhance our partnership.  We look forward not only to expanding our footprint as a medical school, but also to broadening a connection with a valued partner,” said Mark Tykocinski, M.D., The Anthony F. and Gertrude DePalma Dean of Sidney Kimmel Medical College.

Brian A. Gragnolati, president and CEO of Atlantic Health System, shared his thoughts on the agreement by saying, “The trusted network of Atlantic Health System is the setting for nearly every experience a student could expect to encounter in healthcare – an outstanding environment to train the next generation of physicians. Academics, research and scholarly activity in healthcare settings drive excellence to reach optimal patient care. Jefferson shares our focus on population health and primary care which will be emphasized on our campuses. We believe that Jefferson is a perfect fit and are excited to begin this academic journey with them.”

Our newly formed organization, Jefferson, encompasses Thomas Jefferson University and Jefferson Health, representing our academic and clinical entities.  Together, the people of Jefferson, 19,000 strong, provide the highest-quality, compassionate clinical care for patients, educate the health professionals of tomorrow, and discover new treatments and therapies that will define the future of health care.

Jefferson Health comprises five hospitals, 13 outpatient and urgent care centers, as well as physician practices and everywhere we deliver care throughout the city and suburbs across Philadelphia, Montgomery and Bucks Counties in PA., and Camden County in NJ.  Together, these facilities serve more than 78,000 inpatients, 238,000 emergency patients and 1.7 million outpatient visits annually.  Thomas Jefferson University Hospital is the largest freestanding academic medical center in Philadelphia.  Abington Hospital is the largest community teaching hospital in Montgomery or Bucks counties.  Other hospitals include Jefferson Hospital for Neuroscience in Center City Philadelphia; Methodist Hospital in South Philadelphia; and Abington-Lansdale Hospital in Hatfield Township.

For more information and a complete listing of Jefferson services and locations, visit www.jefferson.edu.