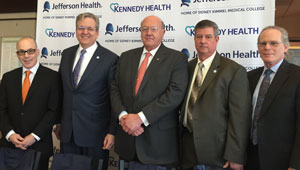 Washington Township, NJ – January 22, 2016 – The chief executives of Kennedy Health and Jefferson announced today that their respective governing boards have voted to enter into a Letter of Intent and to move forward with a framework for potential integration of the two organizations.

Both organizations expect the discussions will lead to a Definitive Agreement setting forth the terms of Kennedy’s integration with Jefferson Health, the combined clinical entity formed by the merger of Abington and Jefferson in May 2015.

After a two-year strategic planning and partnership exploration process, the Kennedy Health Board of Directors voted unanimously to authorize the signing of the LOI to pursue integration with Jefferson. The Thomas Jefferson University Board of Trustees also voted unanimously to authorize the LOI. “Kennedy and Jefferson share a common vision of what we can accomplish together,” said Kennedy Health President & CEO Joseph W. Devine, FACHE. “Having worked successfully with Jefferson on various initiatives since 2011, this proposed partnership will enhance our ability to develop innovative patient care services for our communities.”

The partnership will create an innovative “hub and hub” model, where Kennedy will serve as the southern New Jersey hub of the fully integrated and expanded health system. Central to the plan is the development of a shared governance model, whereby Kennedy will have equal representation as the other system members on a combined board, along with a few independent trustees.

In 2014, Kennedy Health began exploring whether joining forces with another hospital or health system was in the best long-term interest of its patients, its health system, and its associates and physicians. Kennedy Health constituents involved in the confidential selection process unanimously found in Jefferson not only the opportunity to have an impact on transforming healthcare, but the best cultural fit as well. The organizations share a similar philosophy in terms of service, quality and commitment to patients, physicians, faculty, students and employees, Devine said.

With the signing of the non-binding Letter of Intent, Kennedy Health and Jefferson begin a process of due diligence that will enable each organization to learn more about the other. During the due diligence, both organizations will work toward signing a Definitive Agreement. Once the organizations have completed the Definitive Agreement, Kennedy and Jefferson will seek all necessary regulatory approvals.  In the meantime, nothing changes for patients and their families, employees and physicians at either organization, both of which will continue to focus on delivering excellent, safe, efficient care to our patients, every day. To learn more, visit: www.kennedyhealth.org

Kennedy Health is a health services delivery system serving the communities of southern New Jersey. Established in 1965, Kennedy meets the community’s healthcare needs with services at its hospital campuses in Cherry Hill, Stratford and Washington Township, and at outpatient facilities throughout Camden and Gloucester counties. Some of Kennedy’s many acclaimed service lines include: cancer care, orthopedics, diabetes education, wound care, and primary care services, including many Kennedy Health Alliance medical practices throughout southern New Jersey.

Kennedy Health employs more than 4,600 associates and has more than 900 Medical Staff members. Kennedy Health has been recognized three times as a Top Performer on Key Quality Measures® by The Joint Commission, the leading accreditor of healthcare organizations in America, as one of the “Best Hospitals in the Country” by U.S. News & World Report, as well as being named a “Top Workplace” by Philly.com twice.

Kennedy University Hospital’s three locations, which have a total of 607 beds, have each received an “A” grade in the Fall 2015 Leapfrog Group’s Hospital Safety Score for their ability to prevent errors, injuries and infections.

Kennedy University Hospital is the primary teaching hospital of Rowan University School of Osteopathic Medicine. Kennedy is also a member of the Jefferson Neurosciences Network. For more information, visit www.kennedyhealth.org

Our newly formed organization, Jefferson, encompasses Thomas Jefferson University and Jefferson Health, representing our academic and clinical entities.  Together, the people of Jefferson, 19,000 strong, provide the highest-quality, compassionate clinical care for patients, educate the health professionals of tomorrow, and discover new treatments and therapies that will define the future of health care.

Jefferson Health comprises five hospitals, 16 outpatient and urgent care locations, as well as physician practices and everywhere we deliver care throughout the city and suburbs across Philadelphia, Montgomery and Bucks Counties in Pa., and Camden County in New Jersey.  Together, these facilities serve nearly 73,000 inpatients, 239,000 emergency patients and 1.7 million outpatient visits annually.  Thomas Jefferson University Hospital is the largest freestanding academic medical center in Philadelphia.  Abington Hospital is the largest community teaching hospital in Montgomery or Bucks counties.  Other hospitals include Jefferson Hospital for Neuroscience in Center City Philadelphia; Methodist Hospital in South Philadelphia; and Abington-Lansdale Hospital in Hatfield Township.