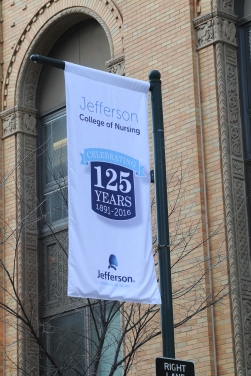 (PHILADELPHIA) –Jefferson College of Nursing will mark its 125th anniversary in 2016 by celebrating its alumni achievements and rich history while advancing the future of nursing education excellence. Founded in 1891 as the Jefferson Hospital Training School for Nurses with an inaugural class of 13 students, Jefferson College of Nursing now enrolls over 950 students per year in 20 programs for nurses at the bachelor’s, master’s and doctoral levels.

“As we celebrate our 125th anniversary, I marvel at how far Jefferson College of Nursing has come while preserving the values on which it was built – a rich education and leadership experience that emphasizes compassionate clinical care,” said Beth Ann Swan, Ph.D., CRNP, FAAN, Dean and Professor at Jefferson College of Nursing. “Our goal is to use this foundation to play an active role in the future of nursing, leading clinical care teams in a humanistic way based on evidence and reflection.”

As part of the 125th anniversary celebration, alumni are invited to participate in an oral history project which will expand the archival record of Jefferson nursing students’ personal stories. Oral histories will delve into alumni career paths, campus memories and advice for today’s nursing students.

“Our 125th anniversary is a perfect time for the College to reconnect with our diverse and accomplished alumni,” said Swan. “I invite our graduates to join in the events, share their stories with us, and help us create nursing excellence in the 21st century.”

Throughout 2016, Jefferson College of Nursing will host events for alumni including panel discussions and celebrations. Alumni can also follow the conversation on social media using #JCN125 for historical fun facts, information on current programs and event photos.

1893 – On November 23, the first graduating class of five received diplomas.1

1918 – The first list of approved nursing schools in Pennsylvania ranked Jefferson at the top.

1933 – The School of Nursing celebrated its first official Alumni Day on April 21.1

1956 – Each member of the class of 1956 passed the State Board of examination for R.N. licensure.

1960 – Jefferson School of Nursing receives full accreditation from the National League of Nursing in December.1

1986 – Jefferson School of Nursing offers its first Master of Science of Nursing degree in rehabilitation nursing.

2015 – Jefferson School of Nursing is designated as a National League for Nursing Center of Excellence.

2015 – The school becomes the Jefferson College of Nursing.