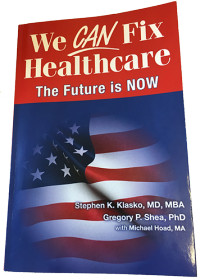 (PHILADELPHIA) - Despite the acrimony of this year's political campaigns, America's political parties have a unique opportunity to create a new and optimistic healthcare system, argues a new book by experts Stephen K. Klasko, MD, MBA, and Gregory P. Shea, PhD, "We CAN Fix Healthcare: The Future Is Now."

Among the answers: Speed up the pace of healthcare disruption, encourage patients to demand and expect healthcare to join the consumer revolution and change the DNA of healthcare providers by selecting and educating a new breed of future team-based providers. The story leads to “twelve disruptors for the demise of the old healthcare” which predict a model for an optimistic future for all stakeholders in the nation’s health.

“We CAN Fix Healthcare" is published by Mary Ann Liebert, Inc., publishers, and will be launched April 21 at Thomas Jefferson University.

- Stephen K. Klasko, MD, MBA, is the president and CEO of Thomas Jefferson University and Jefferson Health, one of the fastest growing academic medical centers in the nation whose mission is to “reimagine healthcare…to create unparalleled value."

-  Gregory P. Shea, PhD, is an adjunct professor of management at the Wharton School, and Senior Fellow at Wharton's Center for Leadership and Change Management, as well as an Adjunct Senior Fellow at the Leonard Davis Institute of Health Economics.

- They wrote the book with Michael Hoad, executive editor of the journal Healthcare Transformation.

“This book deals with difficult issues in a science fiction manner, much the way that Star Trek dealt with social issues," Dr. Klasko said. "The fact that you can read this book and end up with the Democratic and Republican parties embracing the ‘twelve disruptors’ and winding up with similar healthcare platforms seems impossible … but within the context of the story is totally plausible. It’s nice to strategize around a unifying vision in the midst of the current political arguments as to whose hands are bigger or who hates Wall Street more. And that is exactly what happens in this alt-universe resulting in the The Dramatically Different Democratic Discourse on a New Healthcare for America (DDDD) and the Let’s Re-imagine a Republican Revolution in Healthcare, Rather than Repeal (RRRRR) platforms.”

“The book represents our effort to examine the whole healthcare system. If you don't change the whole system, then we can’t create real change. Change just one part and we end up playing whack-a-mole," said Dr. Shea. "The science fiction narrative and overall optimism makes the look at the whole system not just easy to take but, hopefully, downright enjoyable—a spoonful of sugar.”

Publisher Mary Ann Liebert sees the book as critical to understanding the healthcare debate in 2016: "This book is a call for Republicans and Democrats to take advantage of rapid change in health care delivery and collaborate on a significantly better system for America."

“The authors cast a critical eye at where we are at present in the evolution of our healthcare system … disjointed, expensive, and educationally primitive. They then provoke the reader to imagine a system for the next decade that is coherent, cost-effective, and patient centric,” said Dr. Richard H. Rothman, founder of the Rothman Institute in Philadelphia, one of the country’s largest academic orthopaedic departments, and Professor of Orthopaedic Surgery at Sidney Kimmel Medical College at Thomas Jefferson University. “The style is narrative and energizing and is based on a wide variety of interviews looking at service, education, economics, and the sociology of healthcare in the United States. The reader will be richly rewarded with a liberal education in healthcare.”

The book has already received positive reviews from leaders in both business and healthcare, including:

“The book doesn't shy away from all that is wrong with our healthcare system, but the focus is squarely on what can be right about it. If you want to be knowledgeable about the evolution of our healthcare system, and armed with sensible, apolitical solutions, you have come to the right place.” Sanjay Gupta, Chief Medical Correspondent, CNN, practicing neurosurgeon

“Radical change in business takes a special kind of leadership, and healthcare is no exception. Steve Klasko is such a leader, and his book insightfully explores the transformative process that will finally allow healthcare to join the consumer revolution.” Jack Welch, former CEO of General Electric, best-selling author

“We CAN Fix Healthcare – The Future is NOW is a powerful prescription for transcending the grinding inertia and spiraling costs of our healthcare system. With personal interviews of everybody from sick patients to hospital executives – and with an imagined rallying across our otherwise deadlocked political spectrum. Steve Klasko and Greg Shea identify a dozen 'disrupters' and offer a compelling fix for one of our country’s most vital but also most obstinate institutions.” Michael Useem Professor of Management and Director of the Wharton Leadership Center University of Pennsylvania

“Cloud, mobility, and big data shifted market power from entrenched incumbent organizations to customers-in-control. Healthcare had missed this message. Dr. Stephen Klasko is a visionary and a courageous healthcare disruptor. As the leader of one of the nation's most forward-thinking medical institutions, he explains in a clear and easy to read prose exactly what must be done to transform our outdated healthcare system.” John Sculley, former Apple CEO