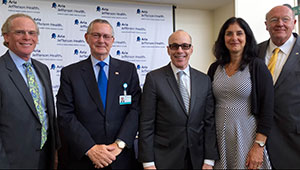 (PHILADELPHIA) – Jefferson and Aria Health today announced they have completed their transaction, giving greater reach to Jefferson’s transformative model of delivering more value to patients by providing the right care, at the right place and the right time in the communities it serves.  Aria and Jefferson entered into a Letter of Intent to join together in October 2015 following a two-year strategic planning and partnership exploration process at Aria.  A Definitive Agreement was signed in January.

The Aria and Jefferson combination comes a little over one year after the Abington Hospital – Jefferson Health and Jefferson merger in May 2015, which marked the beginning of a new era in urban/suburban access to some of the nation’s finest clinicians, scientists, academicians and health care professionals. In January 2016, Jefferson signed a Letter of Intent to move forward with a potential integration with Kennedy Health to serve patients in southern New Jersey. Jefferson is also seeking to redefine higher education, announcing in December 2015 a Letter of Intent with Philadelphia University.

“Bringing Aria and Jefferson together is another significant step forward, as a progressive organization, to do things differently for the benefit of patients, medical professionals, employees, faculty and students in the regions that we all serve,” said Stephen Klasko, M.D., MBA, president and CEO of Thomas Jefferson University and Jefferson Health. “There are deep similarities between the cultures of Jefferson and Aria and a shared commitment to reimagining health care access and delivery.”

“This is an exceptional moment for the Aria family of patients, physicians and staff,” said Kathleen Kinslow, CEO of Aria; and Executive Vice President and Chief Integration Officer, Jefferson Health. “We are eager to combine Aria’s demonstrated ability to deliver high-quality care and exceptional service in our communities with Jefferson’s excellence in delivering complex, compassionate care.  By joining Aria with Jefferson and Abington, we truly are better together.”

Sandra Gomberg, who formerly served as Chief Operating Officer of Aria, has been named President of Aria.

Aria will add the Jefferson Health brand to complement its legacy name, moving forward as Aria – Jefferson Health. Aria’s Frankford, Torresdale and Bucks County hospital sites and its outpatient locations will reflect the Jefferson Health brand.  Jefferson will continue to support Aria’s long-standing mission to serve its community.  In its service area, Aria has been designated as a regional referral site and is an epicenter for new program development as well as expansion of existing programs.

With this integration, the combined organization – Thomas Jefferson University and Jefferson Health – consists of:

In addition, Jefferson’s unique governance structure continues as a combined board with equal representation from Jefferson, Abington and now Aria.