The eight-year extension will run through the 2023 season 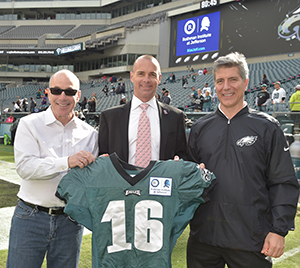 PHILADELPHIA  - The Philadelphia Eagles announced an eight-year contract extension with Thomas Jefferson University, including Jefferson Health and the Sidney Kimmel Cancer Center, and Rothman Institute.  The contract will run through the 2023 season. Jefferson is one of the longest-tenured partners of the Eagles, after originally teaming up with the organization as a “founding partner” in 2004. Rothman Orthopaedics, who have been the team orthopedic physicians since 2004, joined this year during the renewal process as a marketing partner as well.

The Eagles and Jefferson will continue their Tackling Breast Cancer campaign, which has raised $1.2 million for Jefferson’s Breast Care Center since 2005. The organizations will also collaborate on a number of health-related initiatives and events, including prostate cancer awareness and heart health.

“We have had the privilege of partnering with Thomas Jefferson University, Jefferson Health and Rothman Orthopaedics for 12 years and are excited to continue that relationship,” said Eagles President Don Smolenski. “Jefferson and Rothman are leading institutions in the healthcare industry. Their team of physicians, nurses and staff are committed to providing the highest quality and compassionate care for patients in the Philadelphia region. We look forward to teaming up with them to support health initiatives in the years to come.”

The fully integrated partnership features a strong branding presence at Lincoln Financial Field, which includes prominent messaging on the stadium’s LED and video boards during Eagles games. Additionally, Rothman and Jefferson receive exposure across a number of team platforms, such as television programming, publications and PhiladelphiaEagles.com. Another aspect of the agreement includes the Eagles practice jerseys featuring a othman Orthopaedics at Jefferson Health patch.

“This has been a championship combination,” said Stephen K. Klasko, M.D., MBA, President and CEO of Thomas Jefferson University and Jefferson Health. “Jefferson is fortunate to be a leader, along with the Eagles and Rothman Orthopaedics, in impacting the health and well-being of the community and caring for everyone from elite athletes to weekend warriors.”

“As one of the Eagles team physicians, I see firsthand our relationship with the team,” said Alexander R. Vaccaro, M.D., Ph.D., MBA, President, Rothman Orthopaedics. “Elite athletes need elite care which we are proud to offer. Caring for the players and staff raises the profile of everyone, the Eagles, Jefferson and Rothman Orthopaedics. We look forward to continuing our relationship with the team for years to come.”

New this year to the partnership is the High School Football Showdown program, where three different high school football matchups are chosen by a selection committee each week during the season, all vying for a chance to become the ‘Game of the Week’. The competing teams featured in each ‘Game of the Week’ matchup will both earn a monetary prize for their participation, while the winning head coach will become the ‘Coach of the Week.’ The eight winning coaches will be invited to an Eagles home game in December where one will earn the distinguished honor of being named the ‘Coach of the Year.’ That recipient will then be nominated by the Eagles for the Don Shula NFL High School Coach of the Year award, which celebrates high school football coaches for their integrity, achievement and leadership. For more information, visit www.philadelphiaeagles.com/showdown.

Jefferson, through its academic and clinical entities of Thomas Jefferson University and Jefferson Health, including Abington Hospital – Jefferson Health and Aria Health, is reimagining health care for the greater Philadelphia region and southern New Jersey. Jefferson has 23,000 people dedicated to providing the highest-quality, compassionate clinical care for patients, educating the health professionals of tomorrow, and discovering new treatments and therapies to define the future of care. With a university and hospital that date to 1824, today Jefferson is comprised of six colleges, nine hospitals, 34 outpatient and urgent care locations, and a multitude of physician practices throughout the region, serving more than 100,000 inpatients, 373,000 emergency patients and 2.2 million outpatient visits annually.

For more information and a complete listing of Jefferson services and locations, visit www.jefferson.edu

Rothman Institute is a private orthopaedic practice dedicated to providing communities with high-quality, compassionate, and affordable musculoskeletal care that is grounded in evidence-based medicine, the results of which will exceed expectations. Rothman Institute orthopaedists treat patients at over 25 locations in the Philadelphia-region, including orthopaedic urgent care clinics in Marlton, NJ and Limerick, PA.

Consistently recognized as national and regional “Top Docs,” Rothman Institute is proud to be the first practice serving as official team physicians for all four of the major professional sports teams in one city, the Philadelphia Eagles, Phillies, Flyers and 76ers, as well as over 40 college and high school teams.