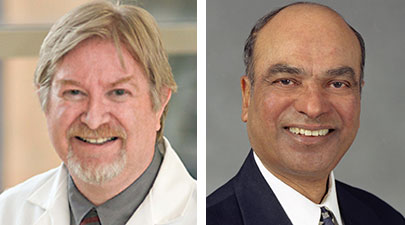 PHILADELPHIA  —The National Academy of Inventors (NAI) selection committee elected D. Craig Hooper, PhD, and Mathew Thakur, PhD, of Thomas Jefferson University to Fellow status, indicating a prolific spirit of innovation in creating or facilitating inventions that have made a tangible impact on quality of life, economic development and the welfare of society.

D. Craig Hooper, PhD, is Professor of Cancer Biology at the Sidney Kimmel Cancer Center and Professor of Neurological Surgery at Thomas Jefferson University. Dr. Hooper has a long history of innovative research that has been successfully translated into novel therapeutics. His laboratory focuses on central nervous system immunity, particularly the balance between protective and destructive neuro-inflammatory processes.

Dr. Hooper, a resident of Medford, NJ, has 10 U.S. patents, many of which focus on recombinant rabies vaccines. This body of work has been licensed to several companies, including Crucell Holland, BV, Molecular Targeting Therapeutics, Inc., Shchelkovo Biocombinat, IDT Biologika, BmbH and Intervet, Inc.

Mathew Thakur, PhD, is a Professor of Radiology and Radiation Oncology, Sidney Kimmel Medical College at Thomas Jefferson University and also directs the laboratories of Radiopharmaceutical Research and Molecular Imaging. Dr. Thakur, a researcher at Sidney Kimmel Cancer Center, has nearly 50 years of experience in the field and has been recognized with awards from the American Chemical Society and the Society of Nuclear Medicine.

The 2016 Fellows, including Drs. Hooper and Thakur, will be inducted on April 6, 2017, as part of the Sixth Annual Conference of the National Academy of Inventors.

With the election of the 2016 class there are now 757 NAI Fellows, representing 229 research universities and governmental and non-profit research institutes. The 2016 Fellows are named inventors on 5,437 issued U.S. patents, bringing the collective patents held by all NAI Fellows to more than 26,000.