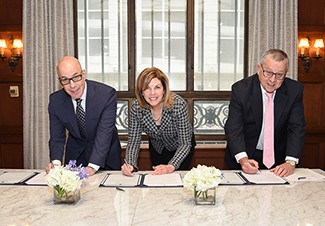 PHILADELPHIA  - The Institute of Emerging Health Professions at Thomas Jefferson University has received a $3 million gift from Australian philanthropists, Barry and Joy Lambert, to support its Center for Medical Cannabis Education and Research. In recognition of this commitment, the center will be renamed The Lambert Center for the Study of Medicinal Cannabis and Hemp at Thomas Jefferson University.

“We are extremely grateful to the Lamberts for this bold and visionary gift, which will have an immediate impact on our research and education efforts,” said Charles V. Pollack Jr., MA, MD, Director of the Institute of Emerging Health Professions. “From the start we have had an ambitious agenda to elevate the science that underpins the therapeutic use of cannabinoids, and this donation provides a huge boost of momentum to pursue the most promising ideas and potential therapies for a range of conditions.”

The gift highlights Jefferson’s growing global reputation as a resource for evidence-based education and research in medicinal cannabis. Jefferson is the first major health sciences university in the United States to establish such a center.

“Joy and I were extremely impressed with Jefferson’s rapid progress in the field of medicinal cannabis research and innovative approach to exploring all avenues for new therapies to include using hemp derived cannabinoids,” said Barry Lambert. “We believe that solving big problems requires courage and big ideas, and that is what we’ve seen at TJU and in the United States where 21st century laws and scientific approaches exist to the use of hemp as a safe and effective source of medicinal cannabis. We’re proud the center will bear our name.”

It was the love only a grandparent can feel that inspired the Lamberts’ philanthropy. As an infant, Barry and Joy’s granddaughter, Katelyn, was diagnosed with Dravet’s syndrome, a rare genetic abnormality that affects the brain's electric signaling system and causes severe and repetitive seizures. Medical cannabis has been shown to be one of the few therapies that mitigates the seizures caused by the condition, and cannabis derived from hemp indeed gave Katelyn substantial relief. The Lamberts’ gift reflects a belief that more study into medicinal cannabis will offer greater hope for others with this and other diverse conditions.

“We have great confidence that Dr. Pollack and the outstanding team at TJU will produce the research needed to deliver the changes that will ultimately improve the lives of millions of people across the world,” said Mr. Lambert.

The Lambert Center will study the therapeutic potential of a wide range of cannabinoids, including a well-known cannabinoid called cannabidiol, as well as many of its close chemical variants that are lesser-known or not often explored scientifically. Hemp – a non-psychoactive variety of the cannabis plant that has been used for paper, textiles, and cordage for centuries – is an additional source for cannabidiols the center will investigate.

"We have directly experienced the miraculous life-saving benefits of medicinal cannabis derived from Hemp” said Mr. Lambert.  “We are confident that working under modern US regulations, TJU and its innovative, scientific approach will prove to the medical profession the benefits and safety of medicinal cannabis for a broad range of illnesses, not just childhood epilepsy."

“The newly renamed Lambert Center has been approaching this emerging field in medicine like a start-up would, and this gift represents its first round of angel funding,” said Stephen K. Klasko, MD, MBA, President and CEO of Thomas Jefferson University and Jefferson Health. “Thanks to the incredible generosity of Barry and Joy Lambert, we’ll be able to catapult our research and educational efforts in medical cannabis.”

Jefferson held a private ceremony on December 6 to formalize the gift. It marks the second transformational gift in as many years that the Lamberts have made toward cannabinoid research, and follows a multi-million-dollar donation to the University of Sydney in Australia.

For more information on the Lambert Center, please visit www.Jefferson.edu/IEHP/LambertCenter.