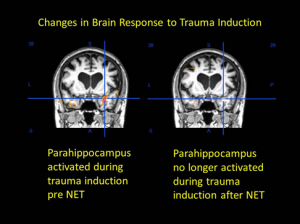 PHILADELPHIA — For some cancer survivors, the memories and physical effects of their experience can last long after their final treatments. Physician researchers at The Marcus Institute of Integrative Health at Thomas Jefferson University tested the neuro-emotional technique (NET), a mind-body therapy, for efficacy in reducing symptoms of traumatic stress in cancer patients and published their results in the Journal of Cancer Survivorship.

“The results of this study were really quite dramatic,” said Daniel Monti, M.D., MBA, principal investigator, and The Ellen and Ron Caplan Professor and Director of the Marcus Institute of Integrative Health. “In just four to five brief sessions, patients who received NET reported much less distress, their overall emotional state improved significantly and the way their brains reacted to stress cues normalized.”

Dr. Monti and his team studied 23 cancer patients who had distressing cancer-related experiences that caused traumatic stress symptoms that persisted for at least six months. Some study participants received NET and others were waitlisted to a control. The treatment group received a functional magnetic resonance imaging (fMRI) while listening to the story of their distressing cancer memory before and after NET.

After NET, reactivity in a number of brain structures associated with the perception of emotional traumas was reduced. For example, the parahippocampus is known to be important for other types of traumatic stress, such as post-traumatic stress disorder in war veterans and victims of sexual assault. In the image to the right, the parahippocampus is no longer activated after treatment (right).

“This is the first study, that our team is aware of, that assessed the combined neurophysiological and clinical effects of an intervention for traumatic stress symptoms in cancer patients, and most importantly, offers a demonstrable solution,” Dr. Monti said.

Study participant Elizabeth Koniz, a breast cancer survivor, described high anxiety prior to receiving NET. “I was fairly skeptical and I feel like I am living proof this works,” she said.

Study authors attribute the success of the intervention to the combination of exposure techniques with nervous system feedback, which uniquely allows therapists to gauge the patient’s subjective distress and how the body is reacting to it.

“This provides extra information that is not usually part of standard interventions, and potentially, what makes NET an especially efficient and efficacious therapeutic solution for traumatic stress in cancer patients,” Dr. Monti said.

Funding: This study was funded by the ONE Research Foundation.