The Center in Johnstown, PA will be led by Trina Thompson and is a product of a
$7.5 million gift from the 1889 Foundation in 2016 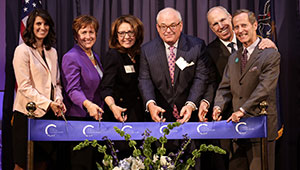 PHILADELPHIA  - Today in Johnstown, Pennsylvania, the 1889 Jefferson Center for Population Health held a ribbon cutting and reception to dedicate the Center’s new space and to introduce the executive director, Trina Thompson, DrPH, BSN.

The 1889 Jefferson Center for Population Health, located in the Crown American building in downtown Johnstown, is a partnership between the 1889 Foundation and the Jefferson College of Population Health of Thomas Jefferson University in Philadelphia. Founded as a collaborative research and resource Center focused on population health, the goal is to work with community stakeholders to improve the health of the citizens living in Cambria and Somerset Counties. The Center’s work will identify key contributing factors to poor health in the region and develop proactive and responsive strategies to address them.

In addition to the being named the executive director, Thompson also holds the position of research associate professor with the Jefferson College of Population Health.  She has more than 30 years of experience in public health and healthcare, in academic, business, and clinical settings, and formally began her new position on Feb. 2, 2017.

The Center, which was established with a $7.5 million, five-year gift from the 1889 Foundation announced in 2016, is the first of its kind established in a rural region rather than a large metropolitan area. It is expected that the work of the Center will provide a national model for how population health interventions can work in smaller communities. Among the Center’s early programmatic and research priorities are the opioid epidemic and disparities in care. Specific goals of the Center are as follows:

The 1889 Foundation was founded in 1993 as the Conemaugh Health Foundation and served until 2014 as the philanthropic arm of Conemaugh Health System. When the System was purchased by Duke LifePoint Healthcare in 2015, it became a for‐profit organization. Conemaugh Health Foundation was thus reborn as the 1889 Foundation and now operates as a completely independent 501(c)3 nonprofit organization. The new name instantly connects the Foundation to two things that are central to the region’s rich history: the Great Johnstown Flood of 1889 and the hospital born from the world’s generosity after that disaster. The mission of the 1889 Foundation continues to support innovative programs and initiatives that improve and transform the overall health and wellness of the region. For more information, visit www.1889foundation.org.

The Jefferson College of Population Health

The Jefferson College of Population Health (JCPH) was established in 2008 as part of Thomas Jefferson University, a leading academic health center in Philadelphia. The first of its kind in the country, the College is dedicated to exploring the policies and forces that define the health and well‐being of populations. Jefferson College of Population Health provides exemplary graduate academic programming in population health, public health, health policy, healthcare quality and safety, and applied health economics and outcomes research. Its programs are enhanced by evidence‐based research, continuing education and professional development offerings, and publications. For more information, visit