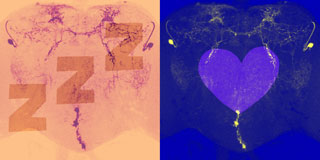 PHILADELPHIA (May 16th, 2017) – Sleep is important, but if there is something more important or interesting to do—for example, taking care of a baby, finishing a grant proposal before a deadline, or reading a fascinating book—we may stay up late. Sleep in fruit flies is a lot like human sleep, and like humans, flies can keep themselves awake if there is something important to do. In research published on May 16th in eLife, researchers report discovery of neurons that allow male fruit flies to suppress sleep so they can court female flies.

“The idea that sleep and courtship might compete with each other is intuitive but had not been studied experimentally, and the underlying neural mechanisms had not been explored. We wanted to know how the sleep drive and sex drive compete to determine behavior,” says Kyunghee Koh, PhD, Associate Professor of Neuroscience, Sidney Kimmel Medical College at Thomas Jefferson University and senior author on the study.

The researchers found that whereas a male fly normally spends much of the night awake and courting if there is a female nearby, a male that has recently mated several females (and therefore has low sex drive) ignores the female and goes to sleep. They discovered that a small number of neurons (termed MS1 for male specific 1) release octopamine, a neurotransmitter similar to human noradrenalin, to keep male flies awake in a sexual setting. Silencing MS1 neurons allows males to go to sleep even when there is a female around, while artificially activating MS1 neurons keeps males awake even when they are alone. Interestingly, although females have the same neurons, their activation has no effect on female sleep. MS1 neurons do not belong to a previously identified group of neurons important for male sexual behavior, but instead communicate with them to keep males awake so they can court.

It is unclear whether similar mechanisms are at work in humans, but Dr. Koh says “it is known that noradrenalin promotes wakefulness in humans. Our work suggests noradrenalin may be especially important for suppressing sleep when we have to engage in other urgent activities”. However, the first goals for her team are to identify specific neurons that communicate directly with MS1 neurons and examine how their activation leads to sleep suppression and how MS1 neuronal activity is regulated.

This work was supported by NIH grants R21NS094782 and R01NS086887 and predoctoral fellowships from the Portuguese Foundation for Science and Technology.