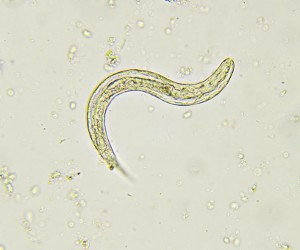 Infection with the parasitic worm Strongyloides stercoralis, commonly called threadworm, can lead to an aggressive hyperinfection in which the worms can overwhelm a patient. The disease affects up to 100 million people and low intensity infections are treatable.

Researchers at Thomas Jefferson University, publishing in the journal Proceedings of the National Academy of Sciences (PNAS), have found a method that could be effective in attacking the parasite at its most aggressive stage and bring its numbers down to a point where it can be treated with available therapies.

“This is a neglected disease, not because it’s unimportant, but in part because it’s been difficult to diagnose and to study,” said senior author and infectious disease researcher David Abraham, PhD, a professor in the department of Microbiology and Immunology at the Sidney Kimmel Medical College of Thomas Jefferson University. “Our research helps explain how and when this species moves to the hyperinfection stage, provides a method for testing new treatments, and suggests a viable target for developing that treatment.”

Dr. Abraham, and colleagues from the University of Pennsylvania and UT Southwestern found that infection with S. stercoralis flairs into hyperinfection when the host is exposed to a steroid. By blocking the receptor for this steroid pathway with an existing agent, the researchers suppressed the parasite’s development and prevented the development of hyperinfection.

“It’s an approach that we think could be applied not just to this parasitic infection, but to many other species of parasites of both humans and animals,” says Dr. Abraham.