To satisfy the cell’s energy needs, reactive oxygen species halt mitochondria by tampering with the molecular machinery that anchors these power-generating organelles to their motor proteins. 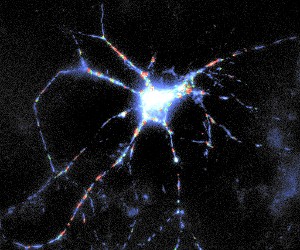 Mitochondria are crucial for powering brain function; neurons constantly traffic these organelles along their lengthy projections to ensure a steady stream of energy in areas far from the cell body. But the signals that control these movements have eluded scientists. Now, researchers at Thomas Jefferson University reveal that reactive oxygen species halt these organelles by blocking their attachment to motor proteins.

“Reactive oxygen species, like many other things in our life, are beneficial and important in low levels, helping in cell regulation and function. But when those levels rise, they become detrimental and involved in disease processes from cancer to cardiovascular disease,” says senior author Gyorgy Hajnoczky, MD, PhD, Professor of Pathology, Anatomy & Cell Biology and the leader of the MitoCare Center for Mitochondrial Imaging Research and Diagnostics at Thomas Jefferson University. “Neural damage and neurodegenerative diseases often produce prolonged elevations in reactive oxygen species. In these situations, halting mitochondria speeds up cell injury and can contribute to disease progression.”

Since high levels of reactive oxygen species are already known to cause harm, researchers were interested in understanding how moderate levels impact normal cell function. “This is very difficult to test,” says Dr. Hajnoczky. “It’s easy to expose a tissue to very levels of high reactive oxygen species from outside the cell but harder to study smaller and localized changes inside the cell.” Within the last few years, new technology has allowed researchers to start probing these questions.

When researchers increased reactive oxygen species within small areas of the cell, they found that they could halt just a few of the organelles, illustrating that cells are capable of parking a small number of mitochondria without stopping them all.

Together with first author and postdoctoral researcher Valentina Debattisti, Dr. Hajnoczky and his team found the protein that reactive oxygen species activate, called p38a, to halt mitochondria. They demonstrated that this protein interferes with the molecular machinery that attaches mitochondria to their motor proteins, although they haven’t quite figured out exactly how p38a engages this machinery.

The group is investigating these mechanisms, in addition to probing whether this process may contribute to stroke and neurodegenerative diseases.

This work was supported by NIH grants DK51526 and PL1 AG032118. A. A. Gerencser declares financial interest in Image Analyst Software, which the researchers used to assess mitochondrial movement over time.