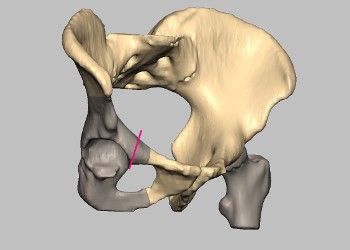 (PHILADELPHIA) -- When surgeons remove cancers, the goal is to remove the actual lump of tumor with a cuff of normal-appearing tissue around it. This is because studies have shown that cancer cells are usually sprinkled in the surrounding normal tissue, so the only way to get the entire tumor out without leaving any cells behind is to remove some extra tissue, or “margin” around the tumor. In best-case-scenarios, the edges of that layer of healthy tissue, or margin, should be negative for cancer, meaning every cancer cell is contained inside the ball of tissue that is removed. Removed tumors with negative margins are associated with the best outcomes for patients, whereas those with positive margins are more likely recur. This is particularly true for bone and soft tissue cancers, known as sarcomas. Now, Jefferson (Philadelphia University + Thomas Jefferson University) and Rothman Orthopaedics researchers have been able to achieve the highest rate of negative margins ever reported for this type of tumor by utilizing a specialized computer system to aid in the removal operation.

John A. Abraham MD, Director of the Jefferson Sarcoma and Bone Tumor Center at the Sidney Kimmel Cancer Center, and colleagues examined the outcomes of patients whose surgeries were aided by computer navigation. The technique makes use of an intra-operative imaging system which helps the surgeon better define complex bone anatomy during the operation. This imaging system maps the patients’ anatomy to an intra-operative digital image, which allows the surgeon to see areas of the anatomy that would otherwise be impossible to visualize: for instance, the surgeon can see right through a bone to the other side, and identify the edge of the tumor and all the nerves and vessels on the other side of the bone that otherwise cannot be seen with the naked eye. This allows much more precision in difficult areas like those behind a bone or behind the tumor, or in between nerves and vessels.

The study was published in the journal, Clinical Orthopaedics and Related Research.

In prior studies, only 29-65 percent of margins were reported as “wide” or cancer-free. This is primarily because the anatomy of the region is so complex, and difficult to visualize intra-operatively. Utilizing the intraoperative navigation system, Dr. Abraham and colleagues were able to achieve negative margins in 91% (21 of 23) patients enrolled in the study.

In order to test whether or not the improved margins made a difference to the patient’s outcomes, Dr. Abraham’s team followed the patients for two years, which is the period when recurrences most frequently happen. Only six of the 23 patients (26 percent) experienced cancer recurrence during that study window, whereas historical recurrence reported in other studies was much higher at 60 percent when the operation was performed without navigation. One other benefit of better visualization is thought to be a lower number of complications, and in their retrospective analysis, Dr. Abraham and colleagues also observed a very low number of complications compared to older studies.

“Although a head-to-head comparison of the two approaches would be useful, this study suggests that it would be worthwhile to consider this approach in treating sacral and pelvic tumors,” said Abraham.