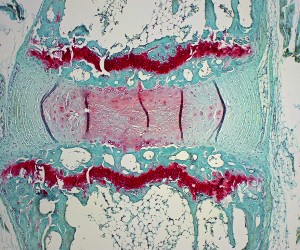 Histology showing intervertebral disc degeneration in SM/J mice, with the disc in pink sandwiched between the growth plates (in red) of the vertebrae . Credit: Hyowon Choi, Thomas Jefferson University.

(PHILADELPHIA) -- The intervertebral discs that cushion the bones of the spine can degrade due to disease or ageing contributing to chronic low back and neck pain. However, researchers haven’t had an adequate animal model to study the phenomenon in the laboratory. Now, researchers at Jefferson have discovered a mouse model of the disease that mimics the spontaneous onset of disc degeneration in humans.

The study was published recently in the journal Matrix Biology.

“With this tool we can now investigate many aspects of disc degeneration in a controlled setting that allows us to pinpoint and evaluate multiple contributing factors,” said Makarand Risbud, James J. Maguire Jr. Professor of Spine Research and Co-Director of the Cell Biology and Regenerative Medicine Graduate Program at Jefferson (Philadelphia University + Thomas Jefferson University). “As opposed to injury-induced disc degeneration, the cellular and molecular processes involved in slow progressing disc degeneration have been poorly understood.”

Over the course of disc degeneration, the inner part of the disc called the nucleus pulposus (NP) that normally absorbs water in order to maintain a gel-like soft consistency, loses the ability to absorb water, and becomes scarred and hardened. The researchers showed that the large proportion of NP cells in this mouse model died at an early age, and the remaining cells changed their original characteristics. They also saw that the NP tissue matrix surrounding the cells altered its composition similar to what has been observed in humans.

“Our studies show that this mouse closely mimics the features of human disc degeneration,” said first author Hyowon Choi, an MD/PhD student working on this project under Dr. Risbud’s supervision. “With this model, we can investigate the genetic and molecular processes responsible for disease onset and progression in detail, and potentially help test new therapies to ameliorate or stall disease progression.”