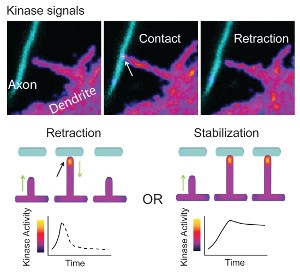 (PHILADELPHIA) – As the brain grows and develops, nerve cells must make connections between one another in order to function properly. Brain cells are tightly packed together, so each cell might touch hundreds or thousands of other cells, and yet those cells only make stable and strong connections with a fraction of those neighboring cells. Researchers have long puzzled over how the probing finger-like neuronal protrusions called filopodia decide on the right place to land and make a stable link. Now researchers at Jefferson (Philadelphia University + Thomas Jefferson University) have shown that a single molecule makes the yes-or-no decision at each touch with a neighboring neuron.

The new research was published in the Cell Press journal Neuron, and could have implications for our understanding of synapse-related diseases such as autism, Down syndrome, addiction or epilepsy.

“We’ve shown here that one molecule can both repel unproductive contacts and connect where appropriate based on the kinds of signals that pass through that molecule,” said senior author on the paper Matthew Dalva, PhD, Professor of Neuroscience at The Vickie & Jack Farber Institute for Neuroscience and Director of the Synaptic Biology Center at Jefferson (Philadelphia University + Thomas Jefferson University). “This molecule is the only molecule we know of that can both repel and connect synapses.”

Using some of the latest tools in neuroscience, including super-resolution microscopy and optogenetics, Dr. Dalva and colleagues followed the movements of the moving filopodia tips as they scanned or “interviewed” locations on neighboring neurons for a good match. They honed in on a particular molecule that is parked at the tip of filopodia named EphB2, which belongs to a large family of kinases that receive signals from outside of the cell and relay them inside the cell. Dr. Dalva’s team developed a biochemical tool that allowed them to visualize how the EphB2 kinase behaved in living cells.

“We suspected EphB2 might be key to this process because our earlier studies had shown that it is crucial for synapse formation, with a 40 percent reduction in synapse formation when neurons lacked this kinase,” said Dr. Dalva. “We also knew that filopodia move less when EphB2 is absent on neurons.”

The researchers used a light-activated version of the EphB2 kinase on the filopodia that allowed them to activate the receptor by simply shining beams of light on the neurons of interest. The kinase would retract, rejecting potential connections when the activation signal was fast. On the other hand, when the EphB2 was activated slowly, the filopodia were able to make stable connections and initiate synapse formation. “We found the fast signal of EphB caused filopodia to retract, whereas the slow signal stabilized them,” said first author Yuting Mao, PhD, a postdoctoral researcher working with Dr. Dalva.

In addition to the critical role in making connections in neurons, EphB are involved in many other cellular behaviors that require cell movements, such as cell migration and tumor migration. This finding could be of interest for understanding the general mechanisms that guide cells to the right targets and how to better design the therapeutic strategies in diseases such as cancer, neurodegenerative diseases, neurodevelopmental disorders and recovery from brain/spinal damage.

“We see this in many areas of biology, where one molecule can play many – sometimes contradictory – roles,” said Dr. Dalva. “Here we the mechanism of how that might happen, with a single molecule relaying both positive and negative signals depending on signal strength.”