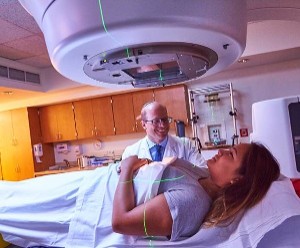 (PHILADELPHIA) -- Among the side effects of radiation therapy, lung cancer patients are at risk for one that may not show up for weeks or months after treatment ends: radiation pneumonitis, or inflammation of the lungs. Patients with the condition experience coughing, chest pain and congestion, shortness of breath, fever, and sometimes require hospitalization. While diagnosis and treatment is primarily dependent on patients reporting symptoms, researchers at the Sidney Kimmel Cancer Center (SKCC) at Jefferson Health have begun a clinical trial on a wearable device that collects symptom-related data for early detection and treatment of the condition.

“This is a brand new device that’s not part of current clinical workflow. So we want to make sure it is feasible to implement, and that’s our primary endpoint,” says Shivank Garg, MD, a fourth year resident in the Department Radiation Oncology at Jefferson (Philadelphia University + Thomas Jefferson University).

Dr. Garg together with Maria Werner-Wasik, MD, Professor of Radiation Oncology and Adam Dicker, MD, PhD, Professor and Chair of Radiation Oncology at Jefferson teamed up with Health Care Originals, the company that makes the wearable device. Originally designed to monitor breathing in asthma patients, the flat, 3-inch, triangular-shaped patch called ADAMM – for Automated Device for Asthma Monitoring and Management, measures biometrics related to breathing: respiration rate and characteristics, wheezing, heart rate, and temperature. It can even measure activity level, such as number of steps taken per day. Dr. Dicker and colleagues realized that many of these biometrics could also be used to detect pneumonitis symptoms, and reached out to the maker to propose a pilot study in lung cancer patients.

In addition to data collected from ADAMM, patients will also describe any side effects they experience, which in some patients can appear during the treatment as well. Research has shown that the side effects a patient considers worth reporting can differ from those a doctor considers worth reporting, which has pushed clinical research toward considering and weighing patient-reported outcomes or PROs more heavily than in the past. But Dr. Garg also values PROs as a way to standardize the study: “If we’re going to compare the data we get from the device and we want to look at quality of life, it is important that we’re using PROs as a measure to compare to because they are better correlated to how patients are actually doing.”

The feasibility trial will assess a number of questions, “Can patients wear the device as often as we’d like them to? Can they remember the proper way to charge the device, apply the device? What do they think of the device and the intervention as a whole? Is it acceptable to them, do they mind it, do they feel comfortable wearing it?” said Dr. Dicker.

Another goal of the trial is to analyze data collected from the ADAMM in order to assess whether it could detect radiation pneumonitis early. “We are also doing an exploratory analysis of different metrics such as heart rate, breathing, coughing, and wheezing, to see how they correlate with any hospitalizations or emergency room visits,” said Dr. Garg. In phase 2 of the trial, which will be randomized and include 100 patients, correlations found in the first phase will be used to alert clinicians if a patient’s biometrics indicate increased risk for radiation pneumonitis, and potentially suggest an intervention.

“Ultimately, we hope to evaluate whether this approach could be used to improve patient outcomes and spot an issue before it becomes a serious problem,” said Dr. Dicker, who has also established a course in Digital Health for medical students at the Sidney Kimmel Medical College at Thomas Jefferson University, where he leads the institution’s Scholarly Inquiry Program in Digital Health and Data Science. “Health care is on the brink of remarkable change, and the foundation of this change is rooted in the universe of digital—everything from the Internet of Things (iOT) to computational computing, big data, and more.”