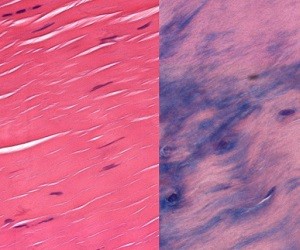 Healthy tendon tissue (left panel) in contrast to tendinotic tissue (right) that causes pain. Researchers found that the cellular processes leading to tendinosis begin with a lack of oxygen in the tissues.

PHILADELPHIA – When tendons get irritated it can lead to a serious condition called tendinosis – a common class of sports and workplace injuries – which is also common in older individuals. It can take many weeks of rest for tendon irritation to heal, with no treatments, save short-term steroid injections and surgery, followed by more rest. New research on the biology of tendon irritation from Jefferson (Philadelphia University + Thomas Jefferson University) pinpoints key molecular components of injury, opening the possibility of targeting the pathways with pharmaceutical and other interventions.

“The most effective natural method for treating tendinosis is to stop the repetitive action that causes the injury in order to let the area heal,” says surgeon and cell biologist Rowena McBeath, MD, PhD, at the Philadelphia Hand to Shoulder Center – Jefferson Health, who led the study. “But stopping an activity that people depend on for income can be quite difficult. Patients often get worse and ultimately require surgery and even lengthier recovery periods.”

Other research has shown that tendon cells change shape under compressive forces, becoming tougher and more like the cartilage in the knee meniscus. Research also suggested that as people age the blood supply to tendons decreases, leaving them starved of oxygen. “Our analysis links these two avenues of research, showing that decreased oxygen is a key event that leads tendon cells to go from healthy to tougher and less flexible, resulting in tendinosis,” says McBeath.

The results were published March 28, 2019 in the journal Aging Cell.

Dr. McBeath and colleagues examined tendon samples from patients who were undergoing surgery for tendinosis and compared tendons from elderly versus young patients. Under normal oxygen levels, the tendon cells retained a normal shape and flexibility. But when those cells were grown in low-oxygen levels, mimicking the low-oxygen environment common in older people, the tendon cells changed shape, and became round and more similar to tough cartilage-like cells, called fibrocartilage.

When oxygen was low, the aged tendon cells also reduced the activity of a signaling molecule called Rac1. Rac1 is involved in many cellular processes, including those governing cell shape, movement and growth. With reduced Rac1, the tendon cells began to change shape, but only in low-oxygen conditions. When the researchers blocked Rac1 activity in high-oxygen conditions, tendon cells were able to retain their normal shape.

“The power of this study is that the results are faithfully describing the processes that occur in human tendon injury, rather than working from an animal model,” says Irving Shapiro, PhD, Vice-Chair, Basic Science Research in Orthopedic Surgery at Jefferson. “With permission from patients, we examined human tendon tissue that was normally discarded during surgery. Analyzing human tissue provides an optimum approach to understanding events that occur during disease development.”

The next steps for the work are to learn more about how manipulating oxygen levels, and the downstream signaling molecules Rac1 and others, might change tendon tissue. If the researchers find a way to increase Rac1 production in tendons, they might be able to help tendon cells keep their shape and thus prevent tendinosis.

The research also has implications for other common degenerative orthopedic diseases, where spurring cells to become fibrocartilage could be equally useful. “Currently we have no way to regrow fibrocartilage tissue,” says Dr. McBeath, “so when that tissue, which keeps bones from rubbing against each other, is damaged in the knee, hip, or spine, it can cause severe pain and result in the need for joint replacement.”

“Now that we understand when and how tendon cells change shape, we might be able to manipulate them to retain tendon qualities, or when needed, turn them into fibrocartilage to replace what’s missing. And before we can apply these ideas in patients, we need to do more work in cell and animal models to understand how these pathways work and how to manipulate them.”