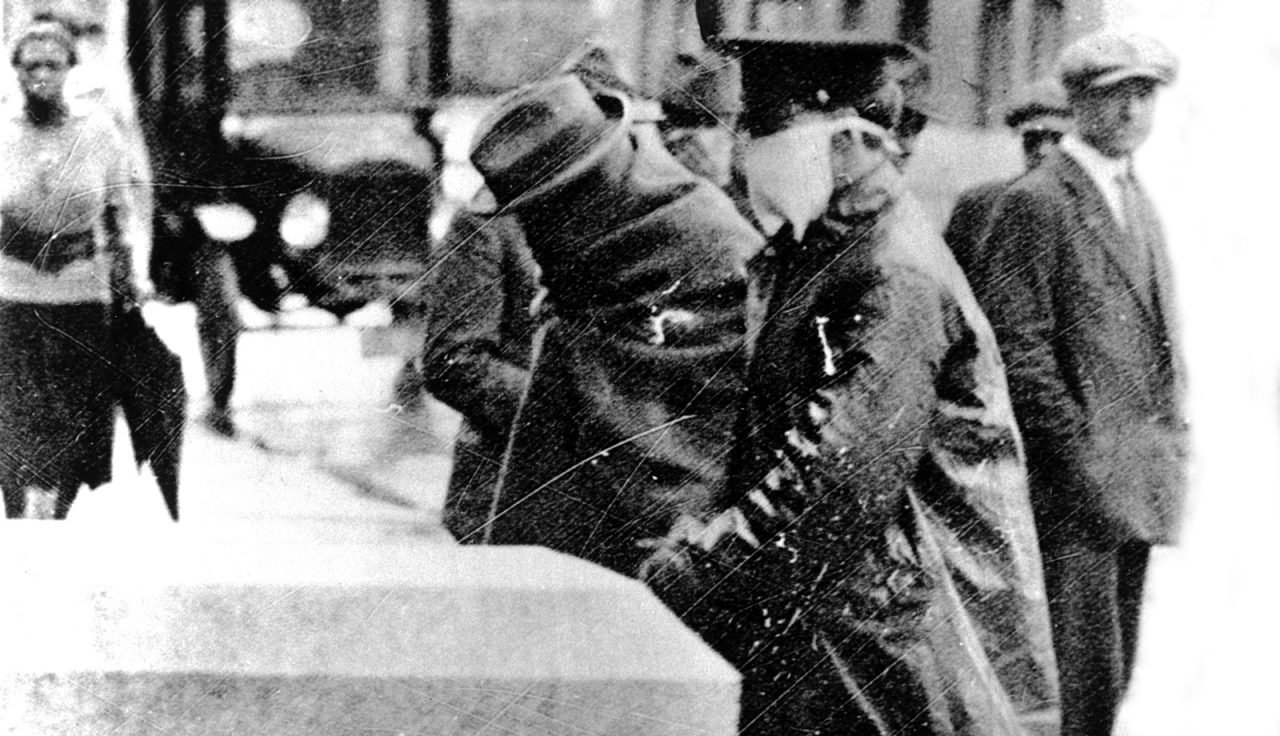 During summer 1918, Philadelphians were enjoying the long-running British musical Chu Chin Chow at the Shubert Theater, Jerome Kern’s Leave It to Jane at the Chestnut Street Opera House, and John Philip Sousa’s Liberty Loan concerts in Willow Grove Park to raise funds for World War I.

Reports of a flu killing thousands in Europe, the Mideast, and Asia drew little attention even after the disease emerged in the United States in Boston in August. And the news of hundreds of sailors falling ill on Sept. 18 and 19 at the Philadelphia naval base gave city health officials scant concern. No one considered canceling the kickoff of the Fourth Liberty Loan Drive, which attracted more than 200,000 people to a parade that stretched 23 blocks Sept. 28.

Less than a week later, 139 Philadelphians died in one day, panic took hold and city health officials turned to Jefferson students for help. 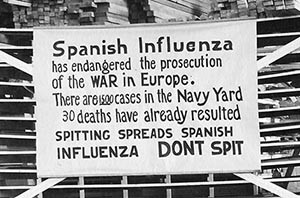 In just one month, the “Spanish Lady”—named for a country hard hit early—would kill an estimated 12,000 in Philadelphia and sicken 35,000 more while threatening the city’s social fabric. Worldwide, the pandemic would infect a third of the Earth’s population, about 500 million people, with the estimates of deaths ranging from 50 million to as high as 100 million. In comparison, an epidemic far better known—the “Black Death” plague of the 1300s—killed just 20 million to 30 million in Europe.

No influenza pandemic before 1918 and none since has come close to the virulence. Although today’s H1N1 influenza is a distant relative of the 1918 virus, it has created a pandemic classified as “moderate” by the World Health Organization, with the overwhelming majority of patients experiencing only mild symptoms and a full recovery, often in the absence of any medical treatment.

In 1918—an era without anti-flu drugs, antibiotics and mechanical ventilators—Philadelphia led the country in deaths. It also gave the world a clear example of the wrong way to handle a pandemic.

The Spanish flu was far from the “old-fashioned grip,” as Vicks VapoRub claimed in newspaper ads of the day.

Instead of striking the very young, very old and the infirm, the Spanish flu struck most fatally at society’s strongest, those 15 to 40 years old. Many victims seemed fine one minute and then incapacitated the next, delirious and racked by fevers as high as 106. Their skin turned blue, purple or deep brown from a lack of oxygen. Pneumonia attacked the lungs, filling them with fluid, and blood gushed from the nose, ears and even women’s vaginas.

The public health director, Wilmer Krusen, promised before a single civilian had died to “confine this disease to its present limits.” When the number of daily deaths broke 200, he promised, “The peak of the epidemic has been reached.” At 300 deaths in a day, he said, “These deaths mark the high-water mark.” The daily death count reached 711 on Oct. 17 before easing. 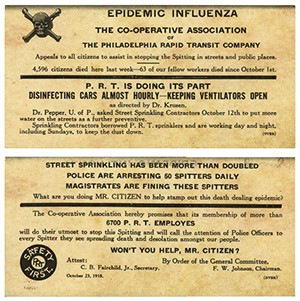 By Oct. 4—when 636 new cases and 139 deaths were reported—the state had closed all the vaudeville and picture houses, theaters and saloons in Pennsylvania. City officials closed the schools and churches. Health officials were frantic. Without the current understanding of viruses, physicians could only ask: How can we stop the disease when no one even knows why it is spreading?

The Philadelphia Inquirer, one of several Philadelphia papers, derided the social interventions: “What are the authorities trying to do? Scare everyone to death? … What then should a man do to prevent panic and fear? Live a clean life. Do not even discuss influenza. … Talk of cheerful things.”

Philadelphia’s delay in trying to contain the outbreak very well may have led to thousands of additional deaths. According to two independent studies financed by the National Institutes of Health, cities that imposed social containment measures within a few days after the first local cases emerged in 1918 cut weekly death rates by up to half. The papers, published in the Proceedings of the National Academy of Sciences in May 2007, also found lower mortality rates in cities that implemented early interventions.

The wisdom of communicating and taking precautions seems evident today, but the 1918 pandemic came against the backdrop of the First World War. To keep up morale, President Woodrow Wilson ordered his administration to limit all news to positive reports; he never made a single statement about the pandemic. Local health officials, and many local newspapers, played down the threat. But as the disease progressed, they could not stifle the population’s panic.

The death rate peaked during the week ending Oct. 16, when 4,597 people died. Vehicles of every description crowded in front of the city’s hospitals, and students volunteered as stretcher bearers, bringing the dead from the hospitals to make room for the living. Medical students drove through the city’s poorer neighborhoods and often found themselves besieged by crowds begging for help.

By Oct. 17, the city put the hospitals under police protection, with patrol cars serving as ambulances.

To counter the health threat of rotting bodies in homes, volunteers drove horse-drawn carts up and down the streets, calling for the dead. Years later, Selma Epp, a child during the pandemic, talked about her 2-year-old brother: “The strongest person in our family carried Daniel’s body to the sidewalk. Everyone was too weak to protest. There were no coffins in the wagon, just bodies piled on top of each other.” 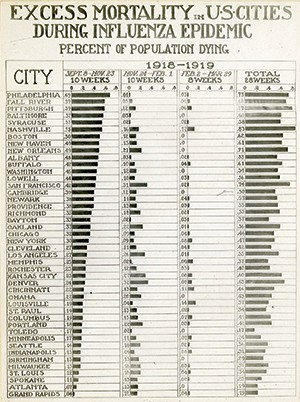 Chart comparing mortality in Philadelphia with other U.S. cities. (Reeve 3141, courtesy of the National Museum of Health and Medicine, Armed Forces Institute of Pathology, Washington, D.C.)

The flu arrived in Philadelphia at a time of vulnerability. About 75 percent of the hospitals’ physicians and nurses were serving overseas in the war, forcing health officials to turn to third- and fourth-year students in the city’s five medical schools to fill the gaps. A senior at Jefferson Medical College wrote in the 1919 yearbook, The Clinic, about a visit from the public health director, Krusen, on Oct. 7 and the students’ service in the coming weeks:

“With tears in his eyes at the sights he had been called to witness, he requested us, in the name of humanity, to lend our aid in getting control of the terrible situation. … The class responded to a man. …

“No one had ever told us of the human problems we should be called upon to face. And in truth there must be real stuff in the man who can strain his every energy in trying to drive back the angel of death; then, failing, stand steadfastly by to comfort the frantic mother, as her little one slips silently into the Great Beyond.”

Isaac Starr, MD, a third-year student at the University of Pennsylvania School of Medicine in 1918, ended up serving at a hospital partially torn down to make way for the new Benjamin Franklin Parkway and then hastily sealed to handle the crush of patients. He wrote about his experiences in an essay for The Annals of Internal Medicine in 1976:

“My patients who often entered the ward with what appeared to be a minor illness became in a few days delirious and incontinent, gasping for breath and deeply cyanotic. After a day or two of intense struggle, they died. When I returned to duty at 4 p.m., I found few whom I had seen before. This happened night after night.”

The pandemic stretched the city’s social fabric. Early on, officials ordered all Philadelphians to wear gauze masks in public: “Protect your jaws from the septic paws.” Those refusing were called “slackers,” one of the worst epithets of the day, and often were run off the street. Spitting became a criminal offense.

Frantic shoppers mobbed pharmacies, forcing the Philadelphia College of Pharmacy and Temple University to suspend classes to allow students to help fill prescriptions, mainly for whiskey, unavailable anywhere else after the saloons closed. As the pandemic dragged on, unscrupulous pharmacists began charging $52—the equivalent of $710 in today’s inflated dollars—for a gallon of cheap whiskey. Bell Telephone, noting that almost a third of its employees had been stricken, implored Philadelphians to curtail telephone calls to emergencies. Charlatans advertised snake oils, and several undertakers increased their prices 500 percent.

Workers abandoned orphanages, and children who lost both parents to the flu lived days in their homes without food. Neighbors allowed neighbors to go hungry. In scenes played out across the country, the Red Cross reported that people “were starving to death not for lack of food but because everyone was too panic stricken to bring food to the sick.”

Against this backdrop of suffering, charity existed. Local businessmen closed their shops and distributed free food and supplies to suffering families. Nurses and nuns, many working 48-hour shifts, visited private homes to care for the ill. University students helped operate a soup kitchen for children whose parents were too sick to feed them. One department store used its telephone-order line to field calls for help and another donated delivery trucks to serve as ambulances.

Just as quickly as the pandemic arrived in Philadelphia, the crisis ended. The city allowed public places to reopen on Oct. 27, though small outbreaks occurred into spring 1919. 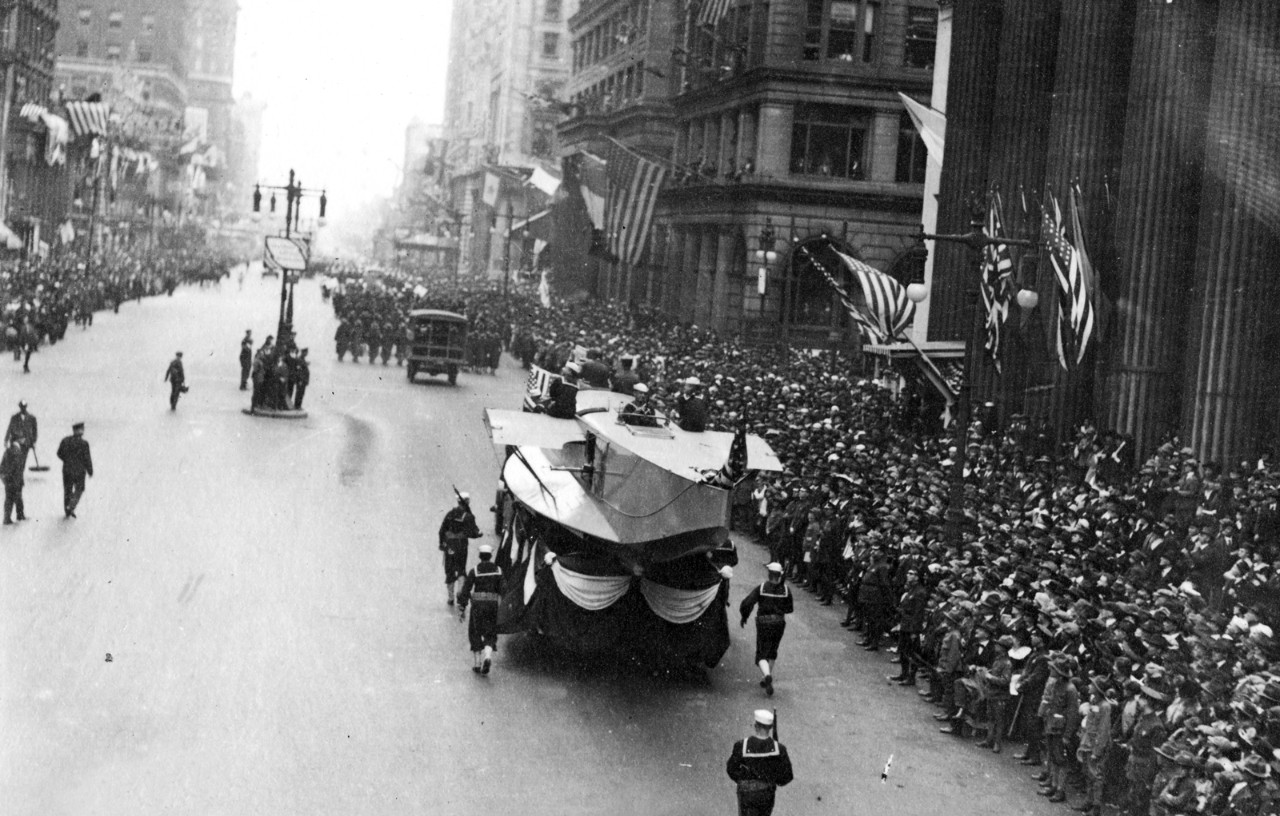 Days after the Sept. 28 Liberty Loan parade, which was attended by 200,000 people, hundreds of cases of influenza were reported. (Courtesy of U.S. Naval History and Heritage Command.)

In its wake, the pandemic left a legacy: Descendants of the virus have caused almost all influenza A pandemics since 1918, though all were relatively mild compared with the first. According to Jeffery K. Taubenberger, MD, PhD, the first scientist to sequence the 1918 genome, the H1N1 virus associated with today’s pandemic is a fourth-generation descendant of the 1918 virus.

From spring 1918 to spring 1919, three waves of influenza swept through Europe, Asia and North America. The first wave, in the United States concentrated in military camps and urban areas, began in March, with the virus infecting a large number of people but not causing an extraordinary number of deaths. The deadly second wave struck simultaneously in the Northern and Southern hemispheres from September to November, and the third wave hit pockets in spring 1919.

Though many experts attribute all three waves to the same H1N1 virus, Taubenberger, chair of the Department of Molecular Pathology at the Armed Forces Institute of Pathology in Rockville, Md., has expressed doubts, saying the difference in death rates would represent a mutation. Evidence indicates profound viral mutations take years to develop and then months to spread around the world; the gap between the first and second wave involved just months, and the second wave struck in many areas of the world at the same time. Because researchers have recovered tissue samples from only the second wave, no conclusive evidence about the first and third exists.

According to Taubenberger, sequence data also suggest that the entire 1918 virus was novel to humans at the time. But what was the source? Taubenberger calls the flu “avian-like” but notes researchers have uncovered no avian influenza genes that provide a good match for the 1918 virus. At the same time, Taubenberger says, the 1918 sequences have too few amino acid differences from those of wild-bird strains to have spent many years adapting in a human or swine host.

The severity of the pandemic begs another question: Could it happen again? Modern medical interventions and preventions make the scenario seem unlikely. No antibiotics to fight the pneumonia that often accompanies influenza existed in 1918, and Taubenberger believes the virus would be vulnerable to the anti-flu drugs available today. Vaccinations—possible only in pandemics that begin with an early wave, as did the pandemic today—also were unavailable. Physicians had no tools to help hospitalized patients overcome breathing distress.

Taubenberger says the unanswered questions from 1918 make a definitive conclusion impossible. But, he says, “We can only conclude that since it happened once, analogous conditions could lead to an equally devastating pandemic.”