A Toast to the Queen 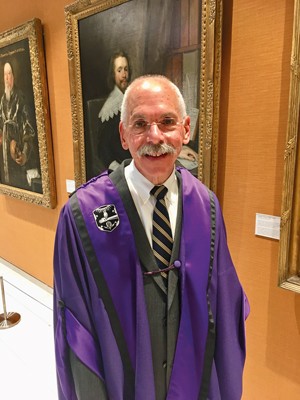 In September 2019, Dr. Weitz achieved another milestone when he was elected as a fellow of the Royal College of Physicians (RCP) of London.

In 2016, the RCP started a joint program with the American College of Physicians to share resources and nurture the common goals of both colleges. Each year, 25 physicians who have reached the highest level in their institution are nominated to receive a fellowship within the partner organization. Dr. Weitz, one of five current ACP masters at Jefferson, is the first within the university to achieve this new honor.

Of the nearly 160,000 members of the ACP, less than 1% have been designated as masters. Since 2016, the RCP has elected approximately 5% of ACP masters as fellows of the RCP.

Dr. Weitz was elected to the RCP based on his research on the identification and reduction of risk for patients with heart disease who undergo noncardiac surgery, his contributions to the ACP, and his commitment to the continued medical education of the next generation.

“Jefferson lives the life of the patient-focused, patient-oriented medical school and academic healthcare center,” Weitz says. “We put so much effort into focusing on the knowledge, the teaching of the students in terms of science, and a humanistic approach to the patient.”

Dr. Weitz’s contributions to the field of cardiology and medicine, and his commitment to training the next generation of master-class physicians, can’t be overstated. Dr. Weitz’s recognition as an American master and a British fellow demonstrates his—and Jefferson’s—dedication to becoming a force for good and reimagining the future of healthcare for patients around the world.