There is a plaque in Hannah Garrigan’s bedroom, strategically placed so that it is the first thing she sees when she wakes up in the morning. It simply states: “Life begins at the end of your comfort zone.” It serves as both a reminder of what she has accomplished by pushing herself beyond boundaries, and encouragement for what she can achieve by continuing to do so.

“It’s been the theme of my life,” says the third-year Sidney Kimmel Medical College student. So far she has challenged herself to leave the security of her family and suburban Chicago home for college in Boston; to move to yet another unfamiliar city for medical school; to veer off of her previously planned-out path of high school–college–medical school–residency–work in favor of a gap year to study public health issues; and to trek across the globe to work with the underserved.

“I find that when I put myself in situations that are unfamiliar—that are uncomfortable—that’s when I grow the most,” Garrigan says.

In the past year alone she has deviated twice from the route to becoming a doctor that she’s had mapped out since kindergarten: first, she put her last year of medical school on hold to pursue a Master of Public Health degree at Thomas Jefferson University’s College of Population Health, and second, she traveled halfway across the world to spend a month volunteering at an eye hospital in Hyderabad, India.

“You just can’t predict where life is going to take you,” says the 26-year-old native of Oak Park, Illinois, who is planning a specialty in ophthalmology. “And that’s the fun part!”

But she wasn’t always so adventurous and open to the unknown. Growing up in an economically diverse suburb of Chicago, Garrigan carefully charted out each step of her life to achieve the dream of becoming a doctor.

“You know those elementary school posters that said, ‘What do you want to be when you grow up?’ Mine always said ‘doctor,’” she says. “So I put myself on the straight and narrow path—do well in school, go to college in Chicago, then med school, then residency, then get a job…”

But the self-proclaimed “homebody” found that pursuing her dream meant jumping off that straight and narrow path to follow the advice on her bedroom plaque. The first step away from her comfort zone was leaving Chicago to become a biology major (pre-med track) at Boston College. “I just had this realization in my senior year (of high school); I knew I had to push myself and not go along with what was safe,” she says. “I had this opportunity to go to Boston College and I took it.”

At first she was nervous about being alone in unfamiliar surroundings and felt overwhelmed by the difference between her outgoing and friendly Midwest ways and the slightly aloof Northeast attitudes: “It was a real culture shock. I was the weirdo in the hallway enthusiastically saying ‘Hi!’ to everyone and talking to people in the elevator.”

In time, she settled in, made friends, and started as a volunteer clinical researcher at Shriners Hospital for Children—Boston. After graduation, she again took a detour from her plans and spent a gap year at Shriners as a clinical research coordinator before applying to medical school—a move that brought into focus her reasons for wanting to become a doctor.

“I realized watching the doctors there what it really means to be a doctor,” she says. “It’s being there for people when they’re lost and vulnerable, and connecting with them to make things better. That’s the incredibly special part of being a physician.”

When it came time to apply to medical school, she said the last place she expected to end up was Philadelphia. But when she visited SKMC, she fell in love with the “warm, welcoming environment” and the connection she felt with the students she met.

Although she was starting to see her dream become a reality, she had one major obstacle to overcome—her own apprehensions.

“I don’t come from generations of doctors like some of the students I met,” she says. “I’m from a blue-collar family—it was really intimidating to feel so different. I constantly had to remind myself I am worthy of this.”

Jefferson agreed, not only inviting her to join the class of 2020 (now 2021), but awarding her the Liss Scholarship for three years straight.

The scholarship was established by Amy Liss and her late husband, Henry Liss, MD ’48, almost 30 years ago for outstanding students with financial need. Garrigan says she was thrilled to travel to the Summit, New Jersey, home of her 88-year-old benefactor, in August 2019 to thank her in person.

“I honestly can’t thank her enough. I would not be where I am today without people like her,” Garrigan says, explaining that the rising cost of medical education and the expense of living in Center City can be overwhelming. “Her kindness and support mean a lot to me on both a financial and an emotional level.”

At the end of her first year of medical school, she was given the opportunity to pay forward that kindness and travel to Nicaragua with Jefferson’s chapter of Global Brigades. The international organization consisting of students and medical professionals works in remote, rural, and under-resourced communities in Honduras, Panama, Nicaragua, and Ghana to implement sustainable health systems.

At first, she was hesitant. “I wanted to do it, but I thought to myself, ‘Just stay in the lane, be comfortable, follow the path.’” But at the constant urging of a friend, she relented, and spent a week working with a group of physicians delivering medicine, running clinics, and helping with manual labor in a small village.

“It was an incredibly life-changing experience,” she says. “It was something I didn’t anticipate, but something I needed to do.”

Another experience that unexpectedly altered her life was an ophthalmology rotation. She originally planned on a career in internal medicine; however, all that changed after a short time on the ophthalmology service of James P. Dunn, MD, director of the Uveitis Unit at Wills Eye Hospital. After a lengthy conversation with him about the specialty, Dunn invited Garrigan to spend a month-long rotation with him. She was sold—ophthalmology had everything she was looking for in medicine.

By her third year of medical school, Garrigan was getting used to the idea of diverting from her original plans, and decided to take a giant leap from her comfort zone after reading Michelle Obama’s memoir, Becoming.

In the book, the former first lady writes about a friend who took “a swerve”—putting his professional studies on temporary hold to pursue a long-held dream of serving as a sports team’s mascot.

“I wanted to do my own kind of swerve,” Garrigan says. “I read the book and asked myself, ‘Do I need to rush into residency or should I take some time to develop as a human being, as an intellectual? Do I want to explore a plan B?’”

After working diligently in school from first through 12th grade and graduating among the top in her class, cramming for the MCAT, and plugging away in medical school for three years, she decided it was time for a break to pursue a plan B—completing a 10-month program for a master’s degree in public health.

“An MPH gives you this lens into medicine that’s different from the view you get in med school,” she says. “It opens up new avenues in policy and advocacy, ethics, quality and safety, and analytics that add to your overall education.”

The MPH swerve led to another—in December 2019, she traveled to India to volunteer at the LV Prasad Eye Institute in Hyderabad, spending a month conducting research, working with patients, and studying public health initiatives.

The opportunity arose out of the blue when she mentioned her interest in global health, her experience in Nicaragua with Global Brigades, and her desire to pursue ophthalmology, to Rosie Frasso, PhD, MSc, MSc, CPH, the program director of Public Health at the Jefferson College of Population Health.

By coincidence, Dr. Frasso had a meeting scheduled with people from India who were visiting Jefferson for the 19th Annual Population Health Colloquium. One of the ophthalmologists from India, Dr. Anthony Vipin Das, presented at the event.

“All of a sudden, we’re meeting with someone and I’m invited to India to work on public health initiatives and the delivery of care,” Garrigan says. While Jefferson has hosted students from India, Garrigan is the first student from Jefferson to travel to India to work at the eye hospital.

Today, Garrigan’s original straight and narrow path to her dream of becoming a doctor looks more like a long and winding road. And that’s OK with her.

“If I’ve learned anything these past few years, it’s that you can’t predict the future. You can plan, but the world is so dynamic that you have to be open-minded to changes and accept that it’s OK to not know where you’re going,” she says.

As for her future? Garrigan says she’s constantly—and pleasantly—surprised by what happens.

“You just have to be open to where life takes you in this crazy world and know that opportunities present themselves in weird ways, and you can either take them or not,” she says.

She does know one thing for sure—she will keep stepping outside of her comfort zone and taking those opportunities. After all these years, the advice on that plaque in her bedroom hasn’t steered her wrong yet. 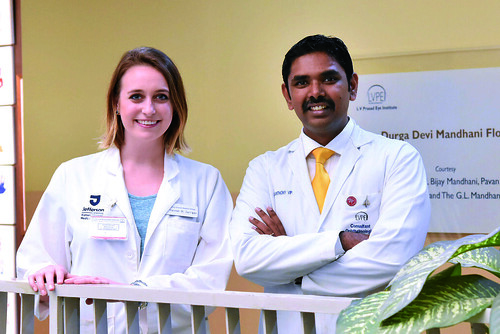