The famous cancer gene p53, which was thought to be less relevant in kidney cancer, may play a larger role than previously appreciated, suggesting new potential for treatment. 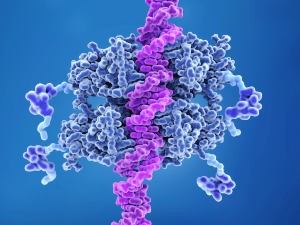 (PHILADELPHIA) -- p53 is the most famous cancer gene, not least because it’s involved in causing over 50% of all cancers. When a cell loses its p53 gene -- when the gene becomes mutated -- it unleashes many processes that lead to the uncontrolled cell growth and refusal to die, which are hallmarks of cancer growth. But there are some cancers, like kidney cancer, that that had few p53 mutations. In order to understand whether the inactivation of the p53 pathway might contribute to kidney cancer development, Haifang Yang, PhD, a researcher with the Sidney Kimmel Cancer Center – Jefferson Health probed kidney cancer’s genes for interactions with p53.

Earlier work found that PBRM1 -- the second most mutated gene in kidney cancer -- could  interact with p53. However, other researchers were unable to definitively show that it was truly an important mechanism in kidney cancer.

Rather than looking at the p53 protein itself, first author Weijia Cai a postdoc in Dr. Yang’s lab and other collaborators looked at an activated version of p53, one that is studded with an additional chemical marker - an acetyl group – at many specific spots.

In a paper published in Nature Communications, on Friday December 20th, Dr. Yang, an assistant professor of Pathology, Anatomy and Cell Biology at Jefferson examined whether PBRM1 can be a “reader”, or translator, of the activated p53. They noticed – by the help of a number of biochemical and molecular tests using both human cancer cell lines and mouse and human tumor samples – that PBRM1 uses its bromodomain 4 to bind to p53, but only in its activated form, with the acetyl group in one specific spot. Tumor-derived point mutations in bromodain 4 can disrupt this interaction, and the resulting mutant PBRM1 loses its ability to suppress tumor growth.

The research suggests that the second-most highly mutated gene in kidney cancer, is strongly linked to a well-studied and understood cancer pathway. Because PBRM1 is present in other cell types and cancers, this finding might be applicable to other cancers as well.

“This shows us that even though p53 isn’t directly mutated in many kidney cancers, the cancer is still disrupting p53 pathway to drive cancer initiation and growth.  This suggests that there might be a therapeutic window for drugs that activate the p53 pathway, which may preferentially impact PBRM1-defective kidney tumors while sparing normal tissues,” says Dr. Yang.

The next steps for the research are to identify the drug or drugs and the therapeutic window. The researchers also plan to determine whether it can be combined with other known therapeutics, and also to investigate which kidney tumor genotypes are most likely to respond to the treatment.

This research was supported by the Translational Pathology Shared Resource at Sidney Kimmel Cancer Center at Jefferson Health via the National Cancer Institute of the National Institutes of Health Award Number P30CA056036, a pilot award from VHL alliance and R01 CA211732.