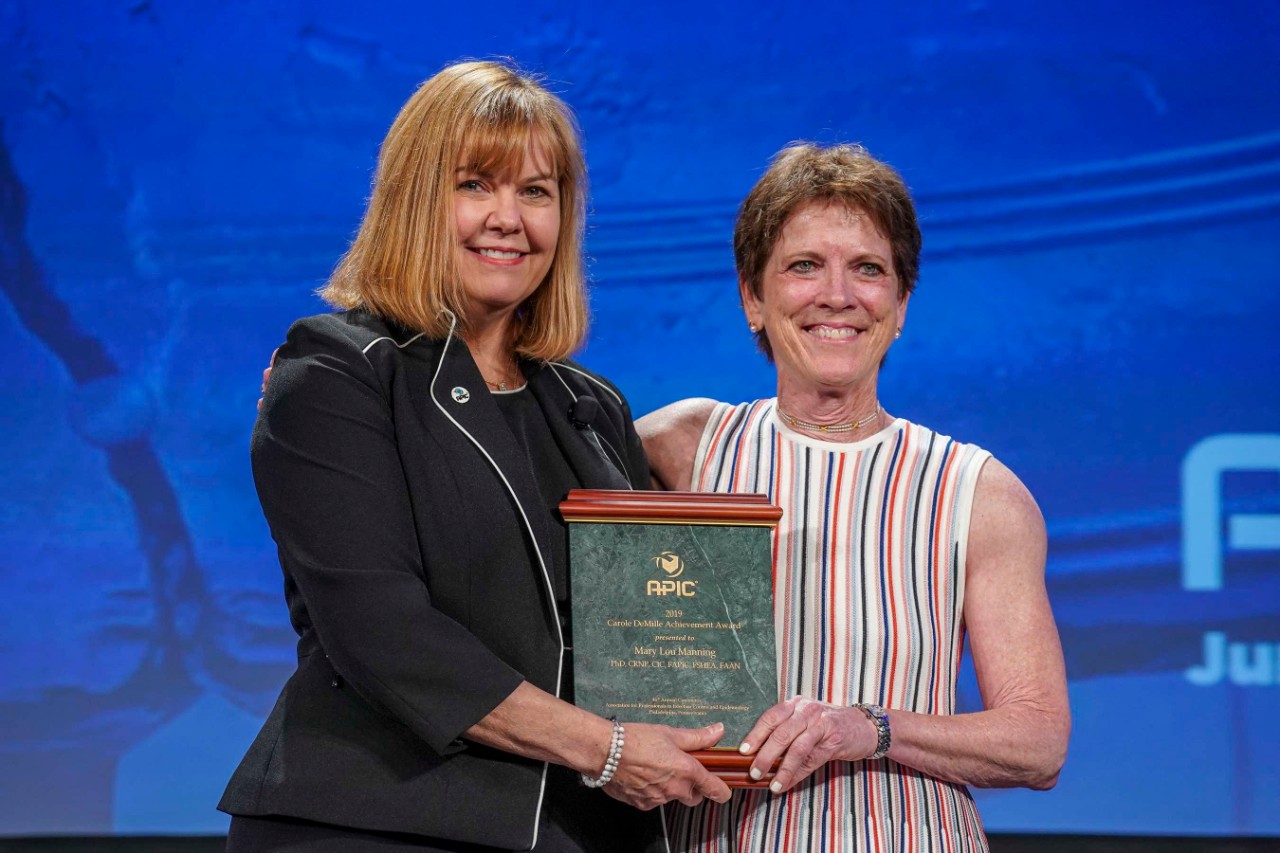 In front of thousands of doctors, nurses and other healthcare professionals, Dr. Mary Lou Manning, professor of nursing at Jefferson, received the prestigious Carol DeMille Achievement Award from the Association for Professionals in Infection Control and Epidemiology (APIC).

Presented at the APIC annual conference in Philadelphia on June 12, Dr. Manning earned the distinction for her visionary leadership and contributions to the field of infection prevention and control (IPC).

“That APIC has bestowed its highest honor, the Carole DeMille Achievement Award, on Dr. Manning is a testament to her deep and sustained commitment to improving the practice of infection prevention,” says Dr. Marie Ann Marino, dean of the Jefferson College of Nursing. “Her visionary leadership in promoting the role of the nurse in antibiotic stewardship and her informed research in this area have led to optimization of appropriate antibiotic use and improved patient safety and outcomes. The faculty and staff of the Jefferson College of Nursing are so fortunate to have her as a colleague.”

Over the past three decades, Dr. Manning has contributed extensively to clinical practice, research and education in IPC. An active APIC member since 1991, she served as 2015 APIC president and as president of the Delaware Valley and Philadelphia chapters in Pennsylvania.

On the global front, Dr. Manning has provided consultation and education in numerous countries, including Indonesia, where she was a member of a post-tsunami Indonesia Disaster Recovery Program team in 2007. During the 2014 Ebola crisis, she served as a faculty member of the CDC Safety Training for Healthcare Workers going to West Africa.

Dr. Manning led the development of a joint APIC position paper on antibiotic stewardship with the Society for Healthcare Epidemiology of America and the Society of Infectious Disease Pharmacists in 2018 and chaired APIC’s Consensus Conference, which culminated in insights that will move the infection preventionist profession forward in meeting the healthcare needs of the 21st century.

Bridging academia and practice, Dr. Manning has effectively introduced cutting-edge science into her work at every level, earning dozens of awards and recognitions over the course of her career, including APIC’s 2018 Distinguished Scientist Award. She has authored more than 40 peer-reviewed publications exploring topics critical to infection prevention, ranging from the role of nursing in antibiotic stewardship to the global implications of emerging infectious diseases. Dr. Manning also is a member of the editorial board of the American Journal of Infection Control.

“Mary Lou has not only been a local Philadelphia hero in infection prevention but has also advanced the field on both the national and international levels,” says APIC President Karen Hoffmann.