A change in the tumor metabolism due to tobacco exposure could open new treatment avenues in head and neck cancer. 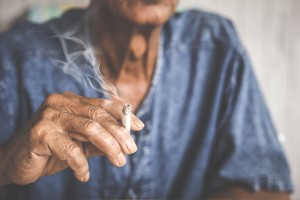 PHILADELPHIA – Head and neck cancer is the sixth most common cancer in the world. The vast majority of cases are head and neck squamous cell carcinoma (HNSCC), a type of cancer that arises in the outer layer of the skin and mucous membranes of the mouth, nose and throat. Cigarette smoking is a major risk factor for developing the disease and reduces treatment effectiveness.

“Cigarette smoke changes the metabolism of cells in head and neck squamous cell carcinomas, making the tumors more efficient as an ecosystem to promote cancer growth,” says Ubaldo Martinez-Outschoorn, MD,associate professor in the Department of Medical Oncology  and a researcher at the Sidney Kimmel Cancer Center – Jefferson Health, who led the new study.

Tumors are composed of cancer cells that grow out of control and non-cancerous cells that support the tumor. Over half of the cells in tumors are support cells and they create what scientists call the “tumor stroma.” The most common cell type in the tumor stroma are fibroblasts, which help maintain tissue architecture. In previous research, Dr. Martinez-Outschoorn and colleagues including Joseph Curry, MD, associate professor in the Department of Otolaryngology-Head and Neck Surgery found that interactions between fibroblasts and cancer cells promote tumor growth.

“We found previously that tumors in human and animal models of head and neck squamous cell carcinoma thrive when these distinct groups of cells support each other,” says Dr. Martinez-Outschoorn. Cancer cells make use of metabolic products generated by the surrounding fibroblasts in order to obtain energy and fuel their growth. “That’s where tumors are most aggressive.”

Marina Domingo-Vidal, a graduate student in Dr. Martinez-Outschoorn’s lab, studied the metabolic effects of tobacco in head and neck squamous cell carcinoma. “Knowing that cigarette smoke is the strongest risk factor for this cancer type, we wanted to better understand how it changes the metabolism of the different cells in the tumor,” Domingo-Vidal says.

In the current study, the researchers exposed fibroblasts to cigarette smoke. They saw that fibroblasts increased a particular type of metabolism called glycolysis, which produces metabolites that are used by the nearby cancer cells to help fuel their growth. In addition, these cancer cells acquired certain features of malignancy such as increased mobility and resistance to cell death. The enhanced support of the tobacco-exposed fibroblasts caused larger tumors in a mouse model of the disease.

In a key finding, the researcher also found a protein on tobacco-exposed fibroblasts that appeared to drive these metabolic changes. “The protein, called monocarboxylate transporter 4 (MCT4), is a major mechanism by which cigarette smoke exerts cancer aggressiveness, and we’ve shown how to manipulate and hopefully reverse it,” says Domingo-Vidal.

“We’ve also seen that smoke-exposed fibroblasts interact with other cells in the tumor stroma, such as the cells of the immune system,” explains Domingo-Vidal. “A healthy immune system is responsible for recognizing and attacking malignant cells, so it will now be interesting to understand how these altered fibroblasts might influence the efficacy of current immunotherapies.”

The discovery has set the foundation for a clinical trial where Dr. Curry hopes to shut down the negative metabolic state induced by cigarette smoke. "Our finding is part of a growing interest in understanding the metabolic relationship between different cells in the tumor microenvironment, and how we can target them to improve patient outcomes," says Dr. Curry.