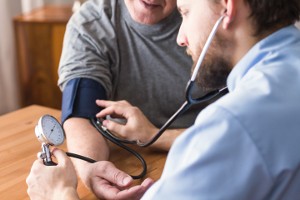 PHILADELPHIA –A new large population-based study from the Sidney Kimmel Cancer Center – Jefferson Health shows that novel oral androgen signaling inhibitor therapies are associated with an increased risk of death in patients with pre-existing cardiovascular conditions. The research was published in the journal European Urology.

“Data from published clinical trials revealed a small but significant increase in the incidence of cardiovascular toxicity in patients treated with androgen deprivation therapy,” says corresponding author Grace Lu-Yao, PhD, MPH, professor and vice chair of medical oncology at Thomas Jefferson University and associate director of population science at the Sidney Kimmel Cancer Center – Jefferson Health. “However, little was known about the short-term mortality in men with cardiovascular risk factors treated with these novel oral androgen signaling inhibitor therapies, especially among patients who did not qualify for clinical trials.”

“This study fills that major knowledge gap: what are the clinical outcomes of men with advanced prostate cancer and pre-existing cardiovascular conditions treated with these novel oral androgen inhibitor therapies?” says Dr. Lu-Yao. “The outcomes of this study provide new relevant data to facilitate patient-physician discussions about the risks and benefits of treatment for men with advanced prostate cancer.”

Men with advanced prostate cancer that progressed on androgen deprivation therapy (ADT) are typically treated with novel androgen signaling inhibitor therapies such as abiraterone acetate and enzalutamide. Many of the pivotal studies which led to the approval of these therapies excluded men with multiple cardiovascular co-morbidities. As a result, the risk in these patients is poorly understood.

In order to explore this question, Dr. Lu-Yao and colleagues conducted a large-scale population-based study. The team examined data from 3,876 patients with advanced prostate cancer collected in the Surveillance, Epidemiology, and End Results (SEER) database, which covers about 30% of the US population.  Sixty-seven percent of the men treated with abiraterone acetate or enzalutamide had at least one pre-existing cardiovascular condition (such as congestive heart failure, acute myocardial infarction, stroke, atrial fibrillation and ischemic heart disease) in addition to prostate cancer. The results showed a higher 6-mortality after starting androgen-inhibition therapy in patients who had pre-existing cardiovascular conditions.

To explore that result in finer detail, the study examined the outcomes by chemotherapy use, since patients whose cancers no longer respond to chemotherapy tend to have more advanced disease and shorter life expectancy than those who have not been on chemotherapy. They found that compared to patients receiving the same therapy for prostate cancer without pre-existing cardiovascular conditions, those with at least three heart conditions had a 43% increase in the relative risk of 6-month mortality (if they had chemotherapy before using the oral androgen signaling inhibitor therapy) and a 56% increase in the relative risk of 6-month mortality among patients without documented chemotherapy use. In essence, having three or more pre-existing cardiovascular conditions was associated with roughly a 50% increase in mortality.

In addition, the researchers examined changes in hospitalization rates following the use of the two oral androgen inhibitors. Among the no-chemotherapy group, abiraterone acetate is associated with an increase in post-treatment hospitalization but the same pattern was not observed in enzalutamide patients.  Among patients with at least three pre-existing cardiovascular conditions and no history of chemotherapy, enzalutamide is associated with a 41% lower post-treatment hospitalization rate compared to abiraterone acetate.

The researchers found that abiraterone acetate is associated with increased hospitalizations in patients taking various classes of medications. “In addition to blocking androgen synthesis, abiraterone acetate may interact with many drugs and lead to higher risk of toxicity from a wide range of other medications,” says Dr. Lu-Yao. “Further studies are warranted to understand the potential mechanisms underlying the observations.”

In response to the study’s findings, Drs. Lu-Yao and Kelly are working with cardiologists to monitor the risk of adverse CVD events and develop alternative treatment strategies.