Sleep May be the Missing Link in Amyloid-Related Cognitive Decline

In patients with dementia, a sleep-dependent mechanism may link accumulation of beta-amyloid in the brain to cognitive impairment. 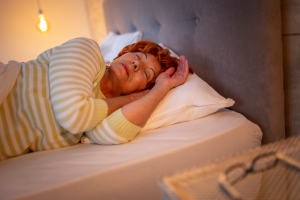 (PHILADELPHIA) – Sleep disturbance is one of many life-disrupting symptoms of Alzheimer’s disease (AD) and other dementia syndromes. Although there is some debate in the field about whether beta-amyloid – a protein fragment that forms clumps between neurons – is a primary driver of disease in AD and other related dementias, few dispute that the protein is involved in some way. Part of the conundrum surrounding beta-amyloid is that studies thus far have only shown a weak link between its accumulation in the brain and cognitive decline in humans, even though evidence from animal models of disease strongly suggests that the protein fragment wreaks havoc in the brain.

New research from Thomas Jefferson University shows an association between beta-amyloid deposition and certain kinds of sleep disruption in patients with dementia. Importantly, through statistical modeling, the investigators also found that disrupted nighttime sleep could be the missing link between beta-amyloid accumulation and cognitive decline in patients with dementia.

“Sleep problems can be one of the biggest issues when caring for patients with AD and other dementias,” says Carol Lippa, MD, senior author of the study and the director of the Comprehensive Alzheimer’s Disease Center at Vickie & Jack Farber Institute for Neuroscience -- Jefferson Health. “When Alzheimer’s patients have sleepless nights, caregivers tend to also have sleepless nights, which can have tremendous impact on their healthcare burden. Our new study helps explain and validate the contribution of sleep deprivation to disease progression that many caregivers have observed for years.” The study was published in JAMA Network Open.

Earlier research had shown that more beta-amyloid in the brain tends to be associated with many kinds of sleep disturbances. Furthermore, animal studies have demonstrated that bad sleep both increases the production of beta-amyloid and reduces how well it can be flushed out of the brain during sleep. Interestingly, the relationship between sleep and beta-amyloid appears to be a two-way street, as many studies have also demonstrated that the accumulation of beta-amyloid in the brain interferes with sleep. But most of these studies have looked at normal brains, not those with AD or other dementias with beta-amyloid accumulation. Does the back-and-forth relationship between sleep problems and beta-amyloid continue to exist in patients with dementia? And importantly, are these changes associated with an overall decline in brain function?

To find out, Dr. Lippa, together with first author Jason You, MD, PhD, and colleagues, enrolled 52 patients with AD and other dementias in a study that examined patients’ brain PET scans, a test that can locate where in the brain beta-amyloid accumulates. The researchers then compared these data to answers about sleep patterns from patient- and caregiver-validated surveys, as well as cognitive abilities from neuropsychological testing.

The researchers found that poor sleep at night, with frequent or prolonged periods of wakefulness, was associated with beta-amyloid accumulation in the precuneus region of the brain. The precuneus region is known to be exquisitely vulnerable to beta-amyloid deposition, and more recent evidence also suggests it may be involved in slow-wave, or deep sleep, cycles. In addition, increased awakenings during the night correlated with greater cognitive decline.

The researchers also found that not all kinds of sleep were affected equally, and different parts of the brain were involved in different sleep patterns. Patients with higher levels of beta-amyloid build-up in the brainstem were more likely to experience daytime sleepiness. “There has been growing interest in looking at the brainstem and how it is involved in the pathogenesis of AD,” says Dr. You. “I think given the brainstem’s important role in sleep and arousal, future studies are needed.”

“Overall, I think our research poses a fascinating question,” says Dr. You.  “What if to combat cognitive decline that occurs as a result of beta-amyloid accumulation in the brain, we need to simultaneously target the removal of beta-amyloid and improve nighttime sleep?”

That said, Dr. You emphasizes that the research performed by him and his colleagues is still in its early stages, and that more work is needed to prove that the relationship they see is important in disease. He also specifically cautions against using sleep-inducing medicines as “blanket therapy” for all dementia patients.

“Many of the sleep medicines available today are blunt instruments, and we don’t know how they would interact with the mechanisms of dementia,” says Dr. You. “This is not to say that these medicines can’t be used on an individualized basis, but families will need to discuss the risks and benefits of using these medicines with their doctors. Ultimately, with a better understanding of the mechanisms driving different dementia syndromes, we hopefully can one day discover targeted therapies for improving sleep in AD and other dementias.”

Dr. Lippa and colleagues plan to further explore the question of beta-amyloid’s involvement in sleep and cognition through studies with the Jefferson Sleep Disorders Center.