High levels of CO2 in the body, due to chronic respiratory disorders, may exacerbate pancreatic cancer, making it more aggressive and resistant to therapy. 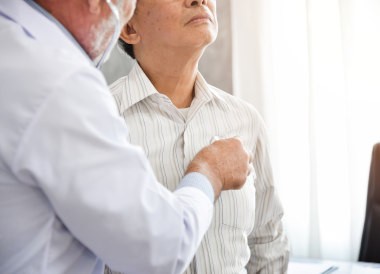 (PHILADELPHIA) –Chronic obstructive pulmonary disease or COPD is associated with higher rates of many cancers, including lung, esophagus, colon, bladder and breast cancer. Often a result of many years of smoking, the disease makes it hard to breathe, leaving patients with lower levels of oxygen and higher levels of carbon dioxide in their blood. Low oxygen, called hypoxia, is a known feature of the pancreatic cancer microenvironment and a contributor to tumor aggressiveness and resistance to therapy. However, the impact of high CO2 levels on pancreatic cancer has been considerably less studied.

Recent work from the Division of Surgical Research in the Jefferson Pancreas, Biliary, and Related Cancer Center demonstrates that CO2 drives both the aggressiveness of pancreatic tumor cells and their resistance to treatment. The research findings were published as an “article in press” on the website of the Journal of the American College of Surgeons on February 12, ahead of print, and offers the possibility of correcting these levels prior to treatment.

“Patients with these respiratory diseases usually start to accumulate excess CO2 in their bodies before they develop symptomatic lack of oxygen,” says first author Avinoam Nevler, MD, a researcher with the Sidney Kimmel Cancer Center (SKCC) – Jefferson Health, and at the department of surgery. “If carbon dioxide indeed contributes to disease progression, we may have an opportunity to improve treatment response not only by focusing on oxygen, but by normalizing carbon dioxide levels in patients as well.”

Dr. Nevler, together with PhD candidate Samantha Brown and senior authors Jonathan Brody, PhD, co-leader of the SKCC GI Cancer Program, and Charles Yeo, MD, Chair of the Department of Surgery and others looked at both pancreatic tumor cell lines in the lab and historical patient data for associations between obstructive pulmonary diseases and pancreatic cancer.

Earlier research had shown that the pancreatic tumor microenvironment harbors increased levels of CO2. Here, the team showed that increasing the CO2 in cell cultures to levels observed in pulmonary patients was enough to increase their growth and aggressiveness. When these high-CO2-cultured cells were then treated with common chemotherapeutic agents and radiation therapy, they showed increased resistance compared to cells cultured in normal CO2 conditions.

The researchers also looked at whether they could see the same relationship in people. Dr. Nevler and colleagues queried pancreatic-cancer patient surgical records for those who also had a diagnosis of asthma or COPD. Although it was impossible to separate the contribution of CO2 and oxygen levels in these patients, the researchers did see that of the 578 patients they examined, cases with chronic lung disease patients had a 60% increased risk of cancer recurrence.

“Although there’s more work to do in order to solidify the association we’re seeing,” says Dr. Nevler, “what’s really exciting is that carbon dioxide levels can be reduced in patients through smoking cessation, using a tailored exercise and respiratory therapy regimen and even changing the diet. We are currently in the process of designing a clinical trial to test these modalities and hopefully extend patients’ lives by normalizing CO2 levels and re-sensitizing the cancers to standard pancreatic chemotherapy,” says Dr. Nevler.

This work was supported by a Mary Halinski Fellowship, the W. Kim Foster Pancreatic Cancer Research Endowment, and in part, with grant support from the Newell Devalpine Foundation. J.R. Brody is supported by an NIH–NCI R01 CA212600 grant and also supported by the NCI of the NIH under Award Number P30CA056036 SKCC Core Grant to K.Knudsen, Thomas Jefferson University.