Surgery During Pregnancy for Gallbladder Infections May be Safer than Postponing

Although surgery during pregnancy is often feared, in the case of cholecystitis or acute gallbladder disease, surgery may lead to better outcomes for mom and baby. 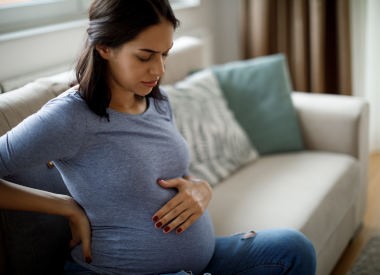 PHILADELPHIA -- Painful gallstones are common during pregnancy. The pain can be intense, coming on suddenly, increasing and often radiating to the back. When gallstones cause inflammation of the gallbladder, a condition called cholecystitis, the symptoms can worsen, with fever nausea and vomiting in addition to the pain. Surgical removal of the gallbladder is the most effective treatment, but surgery during pregnancy is often feared and at times postponed. In the largest US study to date, Jefferson surgeons observed that mothers experiencing cholecystitis during pregnancy had better outcomes if they had surgery during their pregnancy than if surgery was delayed until after childbirth.

“Current guidelines recommend surgery for acute cholecystitis during pregnancy, but many patients and providers delay surgery,” says senior author on the study, Francesco Palazzo, MD, Vice Chair of Surgery at Thomas Jefferson University Hospital. “We wanted to know how often the guidelines were followed, and whether following those guidelines did indeed improve outcomes for pregnant women.”

The study was published in the Annals of Surgery.

The study examined the records of a national sample of 6,390 pregnant women admitted to a hospital with acute cholecystitis from the Nationwide Readmission Database between the dates of January 2010 and September 2015. Despite national guidelines, only 38.2% of women had surgery to remove their gallbladders at the time they presented with cholecystitis during pregnancy.

Pregnant women with cholecystitis who did not undergo gallbladder surgery were three times more likely to have maternal-fetal complications relative to those who did have surgery. The maternal-fetal complications investigated included a combination of stillbirth, poor fetal growth, abortion, preterm delivery, C-section, obstetric bleeding, venous thromboembolism and intraamniotic infection. These differences were mostly driven by an increase in poor fetal growth, preterm delivery and C-section among those pregnant women who did not have gallbladder surgery.

“The data doesn’t tell us exactly why these complications occurred, just that they were more common in women whose surgeries were delayed after accounting for differences between the groups,” says first author Arturo J. Rios-Diaz, MD, a 4th year resident in the department of Surgery. Women who did not have surgery during their pregnancy were also 61% more likely to be readmitted to the hospital within 30 days of being discharged, and 95% more likely to be readmitted with a maternal-fetal complication.

“It can be quite scary and painful for pregnant women to experience cholecystitis,” says co-author Vincenzo Berghella, director of the Division of Maternal Fetal Medicine at Jefferson. “Many physicians are uncomfortable recommending surgery for pregnant women. But these data clearly show that there are risks with waiting out surgery. Patients and physicians should always first discuss the management option which would be chosen if the patient were not pregnant. Like for almost all other medical conditions which can occur in pregnancy, the best option, in this case surgery with removal of the gallbladder, should be done regardless of being pregnant or not.”

“Classically, physicians have been trained that surgery should be discouraged in the first trimester, and third trimester,” says Dr. Palazzo. “But those beliefs have been based on poor-quality and outdated studies. The data suggest that the risks may be much greater for women with cholecystitis who don’t get surgery until after childbirth.”

The following work received support from the Saligman Family Grant, a pilot grant from the Department of Surgery at Thomas Jefferson University for data acquisition. None of the authors declare financial conflict of interest.