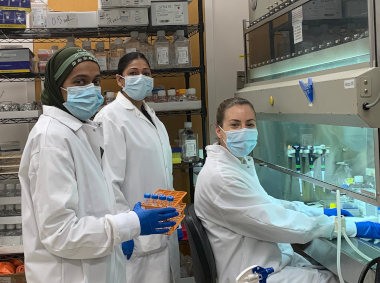 (Philadelphia, PA, USA) – The Commonwealth of Pennsylvania has announced grants totaling $10M to 23 entities to develop effective COVID-19 vaccines, treatments and therapies. The selection from the 70+ applicants was a competitive process that required matched funding in order to be considered. In addition to Governor Wolf, Secretaries Dr. Rachel Levine (Health) and Mr. Dennis Davin (Department of Community and Economic Development) collaboratively made the awards. Secretary Davin hosted a press call to announce the awards. Representing Thomas Jefferson University on the call were Drs. Heather Rose and Donna Gentile O’Donnell, two members of the proposal development team.

The award to Thomas Jefferson University, which received the required matching funds from partner Bharat Biotech (Hyderabad, India) and The Philadelphia Foundation, was granted for the development of CoraVax™, a novel Jefferson-developed COVID-19 vaccine, with a strong pre-clinical data profile. The DCED grant funding will significantly accelerate CoraVax™ formulation optimization, a final step needed for development and implementation of the vaccine for human trials. CoraVax™ has already been shown to induce high levels of neutralizing antibodies against SARS-CoV-2—the virus behind COVID-19—in hamster and mouse models, without triggering any serious adverse events. In viral challenge experiments, animals given CoraVax™ were fully protected against the viral disease, while all control animals showed infection at the expected levels.

Bharat Biotech is currently manufacturing the vaccine for a human Phase 1 safety and immunogenicity study, expected to begin within the next several months. The Bharat Biotech – Jefferson collaboration was announced on May 20.

“With this grant from the Commonwealth, we can generate data as rapidly as possible,” said Dr. Rose Ritts, Jefferson’s Innovation EVP. “Now, we can work toward an agreement for commercialization, licensure and distribution opportunity with an additional partner for the U.S., Europe, and other countries outside Bharat’s distribution map.”

Dr. Matthias Schnell, the inventor of CoraVax™, directs The Jefferson Vaccine Center and chairs Jefferson’s Sidney Kimmel Medical College’s Department of Microbiology and Immunology.  He is well-known in the field of vaccine development around the world, with 13 patents and more than 120 peer-reviewed publications, which have been cited over 9,000 times.  Dr. Schnell predicated the CoraVax™ formulation on other vaccines he has developed in his lab over the years, which have proven effective in pre-clinical animal models for various other viral pathogens, including a coronavirus highly related to SARS-CoV-2, the virus of COVID-19. Those vaccines include ones for Rabies, Ebola, Nipah, Lassa Fever and Lyssa viruses.

Says Dr. Schnell, “CoraVax™ is built on a rabies platform, which is safe and effective in all groups, including pregnant women and children—an important consideration. This vaccine can be mass produced quickly and cost effectively, and it can be stored at simple refrigerator temperature, compared to other vaccines in the pipeline, which translates into cost-effective storage and distribution. CoraVax™ will stand the tests of science and time.”

“To date, much of the public’s attention has been drawn to several vaccine platforms yet to be validated for inducing effective long-term immunity—with questions relating to safety, affordability, and feasibility of distribution,” noted Dr. Mark Tykocinski, Provost of Thomas Jefferson University and Dean of its Sidney Kimmel Medical College. “CoraVax™ is distinctive in this regard, as it is configured around a validated viral vaccine platform, which addresses those questions, and this COVID-19-directed version has so far generated a compelling pre-clinical profile.”

“We are grateful for this important vote of confidence by the Commonwealth in CoraVax™, in Dr. Schnell’s mission critical work, and in Jefferson,” echoed Dr. Stephen Klasko, President and CEO of Thomas Jefferson University and Jefferson Health. “We believe this will be a scientific game-changer, with global impact.”

Thomas Jefferson University is a leader in interdisciplinary, professional education. Jefferson, home of the Sidney Kimmel Medical College and the Kanbar College of Design, Engineering and Commerce, is a preeminent university delivering high-impact education in 160 undergraduate and graduate programs to 8,100 students in architecture, business, design, engineering, fashion and textiles, health, science and social science. The new Jefferson is re-defining the higher education value proposition with an approach that is collaborative and active; increasingly global; integrated with industry; focused on research across disciplines to foster innovation and discovery; and technology-enhanced. Student-athletes compete as the Jefferson Rams in the NCAA Division II Central Atlantic Collegiate Conference.