CAR-T Immunotherapy Could be Improved to kill Solid tumors

CAR-T cells are less sensitive than other types of immunotherapy in detecting and killing melanoma cells, a finding that could help improve immunotherapy sensitivity. 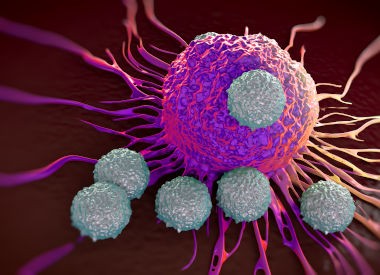 PHILADELPHIA – Immunotherapy, which harnesses the power of the body’s immune system to fight disease, is gaining huge traction in treating cancer. Chief among cancer immunotherapies is a treatment known as CAR-T, or chimeric antigen receptor T cell therapy. CAR-T therapy has had great success in treating blood cancers such as leukemia, especially in children and young adults. But using the therapy to combat solid tumors, including skin cancer, has proven much more difficult.

Now, Yuri Sykulev, a professor of Microbiology and Immunology and Medical Oncology at Thomas Jefferson University and a researcher at the Sidney Kimmel Cancer Center—Jefferson Health, and colleagues, show that to efficiently kill melanoma cells, CAR-T cells require an abundance of antigens—cancer-associated molecules that are overexpressed—on target cells. The findings could lead to better immunotherapies to treat solid tumors.

“CAR-T cells are very useful in killing blood cancer cells, but we found that they need a lot of tumor-associated antigens to kill melanoma, and very likely other solid tumors,” says Dr. Sykulev, who published the new research August 8 in the Journal of Biological Chemistry.

CAR-T therapy draws its power from T cells, the workhorses of the immune system. T cells play critical roles in mounting the immune system’s response to infection, including killing infected cells. CAR-T cells are modified T-cells that display parts of synthetic antibodies on their cell surfaces. These antibody fragments allow CAR-T cells to recognize and attach to specific proteins on tumor cells.

To create CAR-T cells for therapy, researchers isolate T cells from a patient and engineer the cells to display the cancer-targeting antibodies. Then they grow millions of these modified cells in the laboratory before infusing them back into the patient. The CAR-T cells continue to multiply inside the patient’s body and, if all goes to plan, they recognize and kill the tumors displaying the target antigen.

Although CAR-T cell therapy has worked very well in patients with blood cancers, it has not been as successful in treating solid tumors, including skin cancers like melanoma, the fifth most common kind of cancer in the U.S. and the most fatal type of skin cancer.

Dr. Sykulev and colleagues then tested how well another type of immunotherapy, known as TCR-T cells that use T cells engineered to express a specific T cell receptor, killed target cells. TCR-T cell therapy works in a similar manner as CAR-T therapy, but it recognize a different target molecules than HMW-MAA.

When the researchers treated melanoma cells with TCR-T cells, they found that the treatment readily killed the tumor cells even in melanoma cell lines that expressed far fewer target molecules, cognate peptide-MHC ligands, than HMW-MAA antigens necessary for CAR-T detection. The results indicate that TCR-mediated cancer-cell killing has a lower threshold than CAR-T therapy requires, even though both are present on T cells at a similar level.

The comparison revealed that TCR-T is superior to CAR-T therapy for melanoma. “It turns out, CAR-T cells are not as good at killing target tumor cells as TCR-T cells,” Dr. Sykulev says. This difference could help to make immunotherapies more effective in treating solid cancers like melanoma.

“Our research paves the way for understanding how to improve CAR-T cell therapy in solid cancers, and especially to eliminate solid tumors with low levels of target molecules,” Dr. Sykulev says.

This work was supported by the Dean’s Transformational Science Award at Jefferson and by a grant from Hasumi International Research Foundation (Japan). The authors report no conflicts of interest.