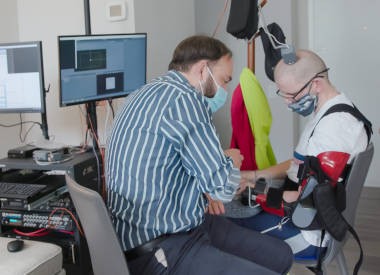 Mijail Serruya, MD, PhD, working with Cortimo patient to use brain implants to control a motorized brace fitted over his stroke-affected arm.

PHILADELPHIA – Someone has a stroke every 40 seconds in the US, resulting in death every 4 minutes. Stroke is the leading cause of disability from a medical condition. When it happens, blood clots or bleeds kill a part of the brain – it goes dark – and can no longer control part of the body. People stop being able to walk, see, talk, or control their hand or arm the way they once did. Although treatments exist, they only work within a short window from the start of a stroke. Rehab can restore some function, but improvements typically plateau in about 6 months.

Now, researchers at Jefferson have initiated a clinical trial using a brain implant and robotic brace to test a method that could one day offer hundreds of thousands of stroke patients with long-term disability a new option for better mobility.

A preprint of the research has been posted to MedRxiv.

“This is the first person ever with this very common type of stroke to be implanted with brain electrodes that send neuronal signals to an arm brace that then controls movement,” says principal investigator of the study Mijail Serruya, MD, PhD, an assistant professor of neurology at Thomas Jefferson University, who was part of the team that implanted the first human with a brain electrode 15 years ago. “This study serves as a proof of concept, a necessary bridge to future studies that would use fully implanted wireless electrodes to improve movement after stroke.

In the past, other clinical trials of brain-computer interface, or BCI, focused on patients with the much more rare and devastating form of brainstem stroke or spinal cord injury that causes paralysis from the neck down, or even locked-in syndrome that renders patients incapable of movement. In those patients, electrodes that recorded brain signals were implanted in the brain tissue and connected by wires extending through the skull to a computer. Their neuronal signal – their intention to move – was then decoded and interpreted by artificial intelligence algorithms into moving a cursor on a screen, a robotic arm or muscle stimulators. Patients with virtually no ability to control their movement were able – with training – to convert their thoughts into signals that controlled a number of electrical device.

But those abilities were only available to the patients as long as the brain implants were in place. Brain electrodes, approved by the FDA only in the setting of investigational trials, implanted in all patients, including Dr. Serruya’s, must be removed because the wires that plug into the computer extend through the patient’s skin. Fully implanted wireless intracortical electrodes have not yet been approved for human use.

“Fully implantable BCI implants are currently being developed by a number of companies,” says neurosurgeon Robert Rosenwasser, MD, MBA who led the implantation surgery for the patient, together with surgeons Ashwini Sharan, MD and Chengyuan Wu, MD. Dr. Rosenwasser is also the chair of the department of Neurological Surgery and president of the Vickie and Jack Farber Institute for Neuroscience at Jefferson Health. “This trial will pave the way for a future in which a patient with permanent disability from stroke can get an implant, train with rehab and artificial intelligence experts to use it, and go home with finer control of a mechanized brace. This study lays the groundwork for that future.”

“This study will be the first patient implanted with electrodes who can walk and still live semi-independently,” says Dr. Serruya. “Although that might seem like an easier task than a fully paralyzed patient, it isn’t. Patients with stroke often develop abnormal movements in order to compensate for what’s lost. We have to overcome this abnormal muscle tone, all while learning to use the implants to control the patient’s arm via the brace.”

Dr. Serruya’s team has been working with the patient daily --  to train his control of the brain-implant to drive  movement of a robotic brace fitted for his weaker arm, as well as how to overcome his abnormal muscle tone. In other words, the patient, like many stroke patients, has an inclination to tighten his left arm across his body, with wrist and fingers clenched. In order to move that weakened hand, the patient needs to both release the tension in his arm – something he does involuntarily – while at the same time think about moving it, through his brain-controlled robotic brace.

Unlike prior BCI studies, which implant and record from electrodes in relatively healthy brains (it’s typically areas in the spine or lower brain that are damaged), Jefferson researchers have implanted electrodes in an area adjacent to the stroke. As a result, the researchers have had to regularly adjust and refine the artificial intelligence algorithms in order to interpret the patient’s intention to move with better fidelity.

“What we’re studying is much more relevant to all of the people who live with disability from stroke. But for that reason, it’s also more challenging,” says Dr. Serruya. His team of engineers and rehabilitation experts have been identifying the challenges and differences of using BCI in a patient who is mobile, and devising solutions – work that will inform all future BCI trials for fully implantable and wireless devices.

“We see our patients go home and struggle with simple daily tasks like picking up a cup of coffee or brushing their teeth,” says Dr. Rosenwasser. “This approach, which helps restore function, could be a game-changer for stroke patients.”

This research was supported by philanthropy from many grateful patients and families over the years.