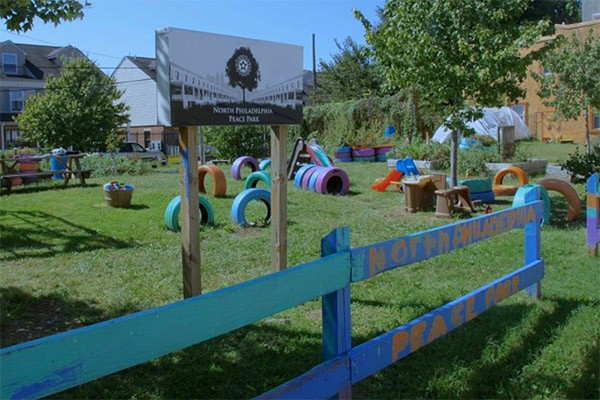 For the fourth time in as many years, a team from the College of Architecture & Built Environment (CABE) has been awarded honors in the U.S. Department of Energy’s annual Solar Decathlon Design Challenge.

Reclaiming what was once a neglected, trash-covered lot in what city officials call Sharswood, residents created Peace Park in 2012 by developing a garden in the shape of a peace sign. Since then, they have expanded cultural and horticultural offerings to the region through local events in a historically underfunded section of the city which is mostly owned by the Philadelphia Housing Authority. As a result, it’s starting to become known in the area by the name “Peacetown.”

The CABE students involved in the submission are Apostolos Karnavas, Tamiris Dos Santos, Elias Valdes Ruiz and Justyna Zalewski. Also part of the team was Rachel Jahr from Drexel University.

The team hoped to create a space for its community members through vertically integrated retail farming in order to add to community wealth. Its proposed design included an open-air market, retail space, gardens and greenhouses to increase food production, as well as a kitchen, recreational, educational, and therapeutic spaces. To reduce potential costs and environmental impact, the team kept all existing buildings on site and repurposed them.

Max Zahniser, a CABE adjunct professor, has been leading the studio.

“We’re honored to call North Philly Peace Park’s leaders our partners,” he says. “Together, we are uniquely equipped to transcend debates about what is possible, in lieu of getting to work on what must be accomplished for a just and sustainable society moving forward.”

According to the DOE, the collegiate competition “challenges student teams to design and build highly efficient and innovative buildings powered by renewable energy. The winners will be those teams that best blend architectural and engineering excellence with innovation, market potential, building efficiency, and smart energy production.”

Winners were announced virtually during the Solar Decathlon Competition Event, which was held from April 15 to 18.

The students from 63 finalist teams represented 58 collegiate institutions during the 2021 Design Challenge, according to organizers. Jefferson again had the most finalist projects of any school in the world, Zahniser says.