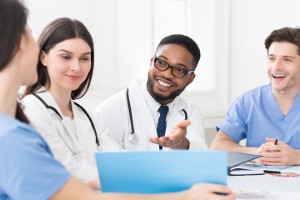 PHILADELPHIA – A standardized medical school exam, often used as a criterion for medical residency programs, may reduce the diversity of applicants in radiation oncology. The discovery represents a call to action for medical societies to reduce the barriers and biases in competitive medical fields.

“Studies suggest patients benefit when physicians of the same background as the patient are available,” says lead author of the new research Christian Fernandez, MD, a radiation oncology resident at Thomas Jefferson University and researcher with the Sidney Kimmel Cancer Center – Jefferson Health. “To improve diversity among healthcare providers is to improve patient outcomes.”

Dr. Fernandez and colleagues explored whether one of the standardized tests commonly used as a criterion for residency programs might reduce diversity in the applicant pool in radiation oncology.

“This is a first step toward understanding biases in the field of radiation oncology so we can then move toward addressing them,” adds Dr. Fernandez, who published the research with Robert Den, MD, an associate professor in the departments of radiation oncology, urology and cancer biology at Thomas Jefferson University, July 29, 2019 in the journal Practical Radiation Oncology.

During medical school, students generally undergo a series of three tests, referred to as the United States Medical Licensing Examination (USMLE) Step exams, to receive their medical degree and become a licensed practitioner. The tests evaluate students’ overall competency in the basic sciences, medical knowledge, and their ability to translate that information into clinical practice. Students take the first exam called “Step 1” after the second year of medical school. This test assesses students’ knowledge of basic sciences such as physiology, biochemistry, anatomy, pharmacology and cell biology.

Many residency programs use students’ results from the USMLE Step 1 exam as a screening metric for further consideration. The aim of the scores is to enable residency programs to judge applicants’ academic qualifications using a standardized tool.

“We wanted to understand how people of different backgrounds are faring,” says Dr. Den. “Are we introducing an unknown bias because of this huge emphasis on an objective measure, in this case, the Step 1 licensing exam?”

The researchers reviewed residency applications submitted to the radiation oncology program at Thomas Jefferson University between 2015 and 2018, which they found to represent nearly 90 percent of all radiation oncology applications nationwide. Then they assessed whether the distribution of applicant demographics – sex, age and race/ethnicity – changed with increasing USMLE Step 1 score requirements.

“As an initial screening tool, using Step 1 scores likely removes more minority representation and apparently increases non-minority or young Caucasian male representation, which runs counter to what all the major oncology and education societies have in their mandates,” Dr. Fernandez says.

The researchers emphasize the point of the paper is not to say that test scores are irrelevant, but perhaps are only part of what matters in an application.

“There are six core competencies in medical education,” Dr. Fernandez says. “One of them is medical knowledge, but you can’t make it the only pillar. The others are practice based-learning, patient care, systems-based practice, interpersonal and communications skills and professionalism. These have been set by the Accreditation Council for Graduate Medical Education (ACGME) as foundational to all practicing physicians.”

Dr. Fernandez, Dr. Den and colleagues are looking at more holistic ways to evaluate applicants. One element is emotional intelligence.

“When we think about residency, there are two components to it. One is how bright an applicant is, but especially in oncology, there’s an entire emotional, empathetic nature to the profession that we believe is very important,” says Dr. Den.

The researchers are working to figure out how to create national benchmarks like the USMLE using a metric that would gather the emotional intelligence of applicants. “That’s the other balance piece we all know we need but don’t have a way to implement yet,” says Dr. Den.

Efforts at Thomas Jefferson University are already underway to help incorporate standardized empathy evaluation in medicine. Mohammadreza Hojat, PhD, a research professor in the department of psychiatry and human behavior at Sidney Kimmel Medical College – Jefferson Health, and his team developed the Jefferson Scale of Empathy, a validated questionnaire that measures empathy in healthcare professionals and trainees, and which correlates with patient outcomes.

“Diversity is the best way for our field to grow, to have more ideas, to come up with new approaches, to think of problems from a different perspective,” he adds. “What this research really shows is not that we need to necessarily eliminate USMLE scores, but rather, raise the other components to match the rigor of those tests.”