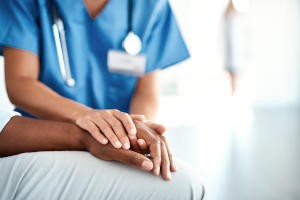 PHILADELPHIA, PA. – A key factor of solid patient/doctor relationships is a notion of empathy that drives a feeling of shared humanity.

According to the Dr. Mohammadreza Hojat, empathy in the context of patient care is “a cognitive attribute that involves an ability to understand the patient's pain, suffering, and perspective combined with a capability to communicate this understanding and an intention to help.”

A newly released national study – led by Dr. Hojat of the Sidney Kimmel Medical College at Thomas Jefferson University raises some tough questions about the level of empathy amongst medical students, though.

For the study, 10,751 students enrolled in 41 of 48 campuses of DO-granting medical schools in the United States completed a web-based survey at the end of the 2017-2018 academic year.

The survey included the Jefferson Scale of Empathy (JSE) and the Infrequency Scale of the Zuckerman-Kuhlman Personality Questionnaire for measuring "good impression" response bias. Researchers compared JSE empathy scores among students in different years of medical school, as well as with preexisting data from students of U.S. MD-granting medical schools.

What did they find? That empathy levels dropped when students progressed from the preclinical years (years one and two) into the clinical phase (years three and four) of medical school “when empathy is most needed.”

“As students progress through medical school, you expect empathic engagement in patient care to improve. Apparently, that’s not the case,” said Dr. Hojat, a Research Professor in the Department of Psychiatry and Human Behavior and Director of the Jefferson Longitu­dinal Study at the Center.

Dr. Hojat said the findings struck him as being emblematic of a field driven by an “over-emphasis on science of medicine, and ignoring the art of medicine.” From here, he concluded, it’s incumbent upon researchers to figure out what’s behind the decline in empathy, while continuing to research the matter.

“It’s an important responsibility of medical school to train knowledgeable, technically proficient doctors. They should train physicians who can establish better relationships with the patients, not only doctors who can pass an exam to get license and practice medicine,” he said. “You can teach and enhance empathy, but the problem we noticed is that it’s not enough, that you have to do additional things to sustain it.”

Dr. Mohammadreza Hojat is available for interviews to discuss the findings of this study, potential causes and remedies for the dropoff in empathy levels as DO and MD students progress through medical school. Contact Brian Hickey at 215-951-2718 or brian.hickey@jefferson.edu to schedule an interview, or to get more information about this survey.