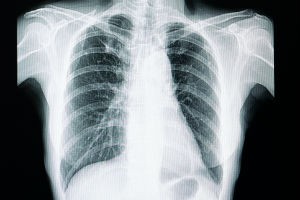 PHILADELPHIA -- Our lungs work tirelessly all through the day to keep us breathing, seamlessly expanding and contracting. When lung tissue becomes damaged and scarred, it can lose its flexibility, making it harder to breathe.

Lung scarring can lead to diseases like pulmonary fibrosis, and potentially life-threatening complications. Lung fibrosis can also develop in patients with a rare, hereditary disorder known as Hermansky-Pudlak syndrome. Researchers in the lab of Freddy Romero, PhD at the Center for Translational Medicine at Thomas Jefferson University are trying to understand what contributes to the development of pulmonary fibrosis in animal models and patients of Hermansky-Pudlak syndrome.

Cells in any tissue of our body are held together by a scaffold called the extracellular matrix. When this scaffold holding the tissue in place is damaged, the structural integrity of the tissue also changes. Enzymes called matrix metalloproteinases (MMPs) normally help take down scaffold that isn’t needed anymore, but these enzymes can become overactive in disease. MMPs are often altered in many different lung diseases, where a shakier scaffold can cause rigidity and inflammation in the surrounding tissue. However, it’s unclear what role these enzymes play in Hermansky-Pudlak syndrome.

In this study, the researchers examined whether MMP activity was altered in lung tissue affected by Hermansky-Pudlak syndrome, and how these changes were connected to the onset of pulmonary fibrosis. The findings were published in Orphanet Journal of Rare Diseases on July 4.

They found that certain subsets of MMPs were increased in the lungs of mouse models of the disease, as well as in fluid collected from the lungs of patients with Hermansky-Pudlak syndrome. In both mouse models and patient samples, MMP was detectable at high levels prior to development of fibrosis, indicating that high levels of MMP may be associated with onset rather than progression of the disease.

It was previously unknown how mutations underlying Hermansky-Pudlak syndrome could lead to the development of pulmonary fibrosis. This study provides a new link that may be useful in the diagnosis and treatment of the disorder. First author on the paper Ross Summer, MD at the Jane & Leonard Korman Respiratory Institute Medicine and National Jewish Health  explains, “Our work supports the notion that dysregulation of MMPs contributes to the development of pulmonary fibrosis. But importantly, it also suggests that unique patterns of MMP alterations could be exploited for the diagnosis and/or prognosis of lung disease in Hermansky-Pudlak syndrome.”