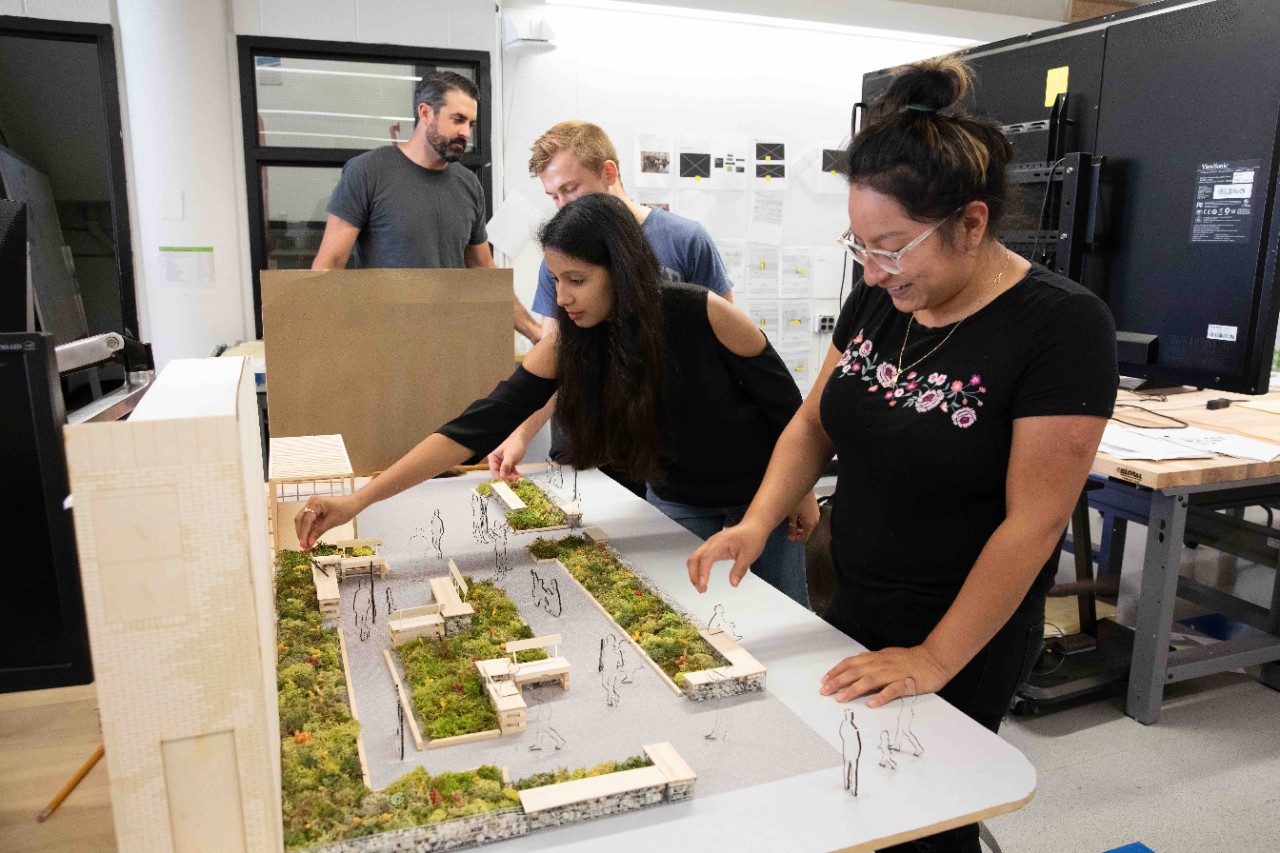 With Park in a Truck Program, Jefferson Looks to Help Transform Underserved Communities

“They’re open and available lots,” stresses Douglas, director of the University’s landscape architecture program in the College of Architecture and the Built Environment. “We don’t call them vacant.”

Using this kind of positive language, she sees opportunity in all these tiny parcels of land, often in the city’s underserved neighborhoods, and along with College of Population Health professor Drew Harris, a transdisciplinary group of Jefferson students and the community, she hopes to transform Philly’s urban environment.

A Blossoming Idea
For years, Douglas has worked to restore these overgrown, litter-strewn spots into green oases, places for neighbors to chat over coffee and kids to play with their friends. However, city bureaucracy, high costs and community engagement challenges often put well-meaning projects in limbo and gave her pause.

“It made me realize that we need a better process,” says Douglas, who also directs Jefferson’s Lab for Urban and Social Innovation and recently won the American Society of Landscape Architects’ Community Service Award. “There has to be a better way.”

Douglas and Harris met at a 2018 meeting of the Philadelphia Collaborative for Health Equity. The two quickly hit it off and began to brainstorm, Douglas through a design lens and Harris from a population health perspective—a conversation aided by the Philadelphia University-Thomas Jefferson University merger.

They wanted to create beautiful, inexpensive green networks throughout the city for people and wildlife, and importantly, the community would have complete buy-in in all aspects of the park.

The more they talked, the benefits became even clearer: Designing, building and maintaining the park cultivates neighborhood and civic pride, and projects like these provide educational opportunities, stimulate the local economy, increase biodiversity and promote healthy living.

“We can significantly improve health outcomes by adding these green spaces,” Harris explains. “The data already shows this. You build a park, you reduce gun violence in the immediate area. You improve mental health outcomes.”

From these seeds, the idea of Park in a Truck blossomed. Harris, Douglas and their team are developing a toolkit that includes all the necessary steps to build a park from scratch, including guiding principles, site analysis, templates, fundraising, supplies and more. No expensive infrastructure, excavation or construction experience required—just a willingness to beautify the neighborhood.

“We want to design parks that arrive in a truck, ready for the community to assemble,” says Douglas, the Anton Germishuizen-Stantec Term Chair for Landscape Architecture, about their one-stop-shop concept. 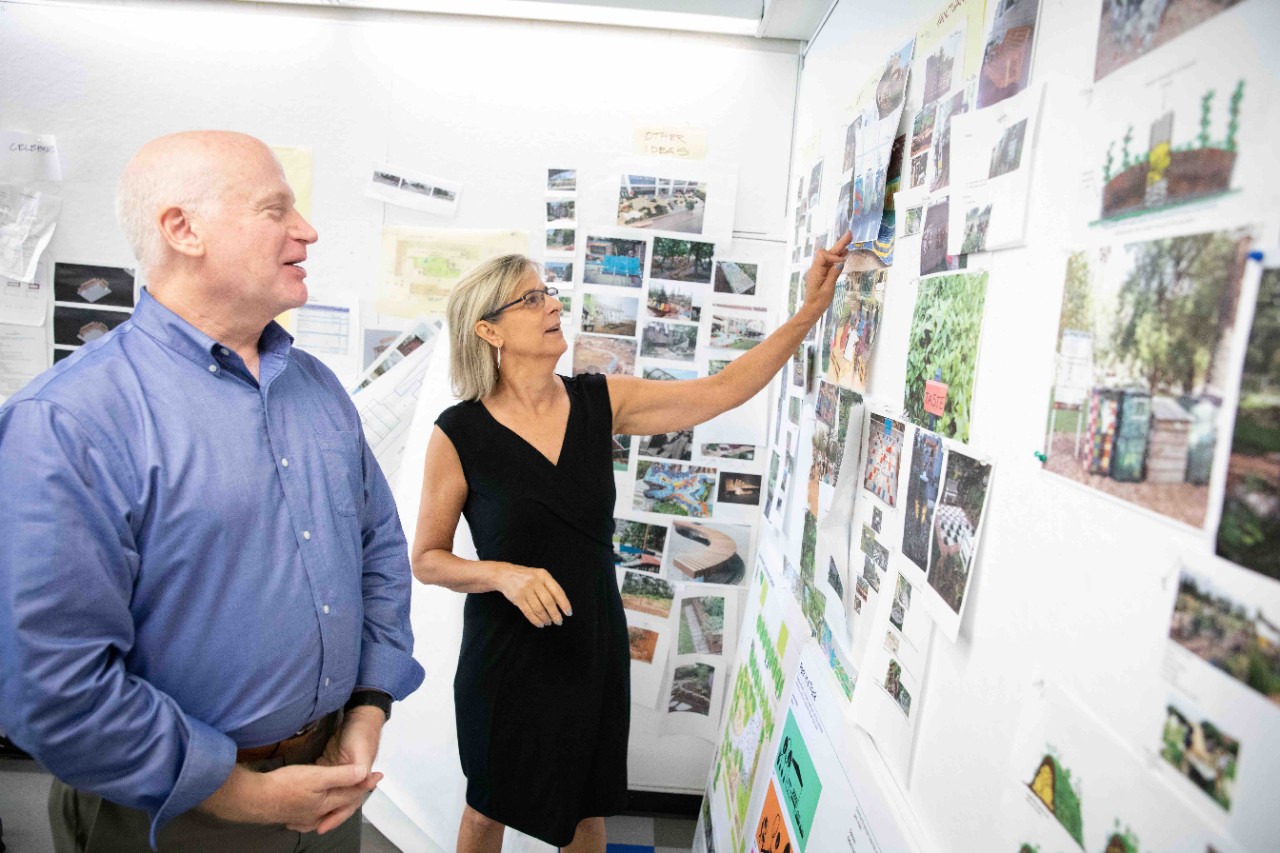 The First of Many
They wrote about the idea in an Inquirer column and pitched it to area competitions. More people took notice, and they received funding earlier this year from the Greenfield Foundation to create their first park at the corner of 38th and Melon streets in a lot provided by West Philadelphia Real Estate.

The city’s Mantua section features several playgrounds and basketball courts but lacks those vibrant nooks where people can come together outside to read, eat, play chess and socialize, says Gwen Morris, secretary of the Mantua Civic Association and a 45-year resident of the neighborhood.

This now will change with the inaugural 2,200-square-foot Park in a Truck opening in October after a two-to-three weekend build, which also is supported by Jefferson’s Center for Urban Health, the Philadelphia Collaborative for Health Equity, the Pennsylvania Horticultural Society, Philadelphia Water Revenue Bureau and Mural Arts Philadelphia.

Mantua resident Camille Marion has lived in the house next to the lot since 1992. For years, she tended a garden with chickens there, but the space has since become overgrown with weeds and fallen into disrepair. “I feel good about it,” she says of the coming change. “It was nice, but it’s going to be better.”

“It will mean so much to so many people,” Morris adds. “The park reflects the wishes of the community. If people are involved in the development, creation and building, they have a sense that this belongs to us. We’re going to take care of it.”

The Jefferson team met several times with area residents, from kids to seniors, to solicit feedback and plan the park. In Douglas’ favorite part of the whole experience so far, she led a design charrette with a group of neighborhood 6- to 12-year-olds.

“We’ve been part of the whole process,” says De’Wayne Drummond, president of the Mantua Civic Association. “It’s just not just a truck showing up and dumping stuff out there.”

A transdisciplinary group of 15 Jefferson students, including the landscape architecture, architecture, public health, construction management, population health, and user experience and interaction design programs, have played a key role in working with the community and seeing the project to fruition.

“We’re exposing these students to things they wouldn’t normally experience,” he says, noting the value of helping communities that may be overlooked by larger city-run improvement initiatives. “I believe in this idea.”

This knowledge transfer, as well as positive word of mouth, will be at the centerpiece of growing Park in a Truck, a model in the running for Best in Design at DesignPhiladelphia.

“Ideally, each Park in a Truck built will have less and less involvement from us,” Harris says. “We might get to the point where we don’t even know about them. They go to the Park in a Truck website, use our toolkit and then parks are created. It just becomes self-sustaining.”

But until that time, the Jefferson team sees the 38th and Melon spot as the launch pad for other open and available lots in the neighborhood (and beyond), hooking into the Mantua Greenway and the nearby Philadelphia Zoo to create a network of green space in the poorest major city in the country.

“We would like Philly to be known as a city in a park,” Douglas says, “instead of a city with parks.” 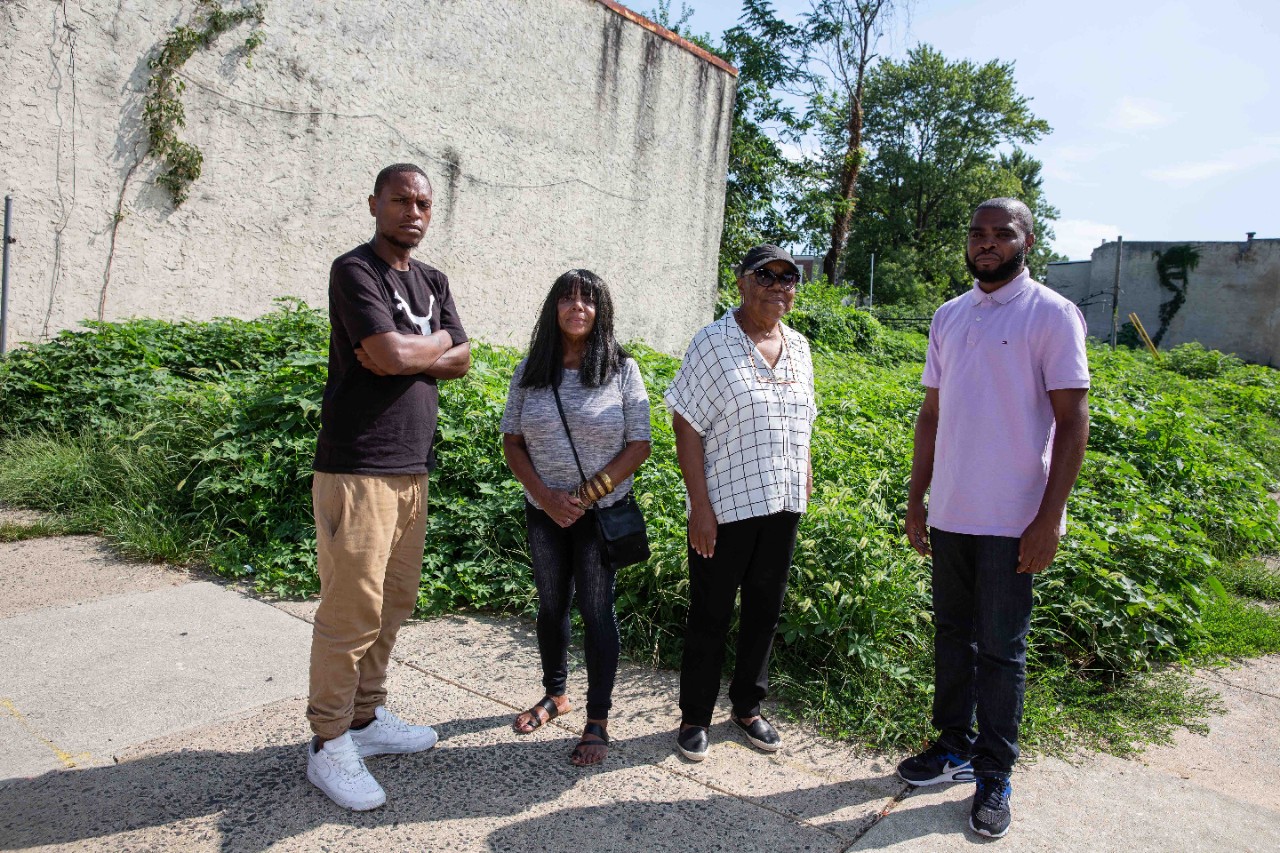 Mantua community members Nathaniel Mitchell, Camille Marion, Gwen Morris and De’Wayne Drummond stand in front of the lot at 38th and Melon streets where the first Park in a Truck will be built in October.