Modulation of Norepinephrine by Cannabinoids 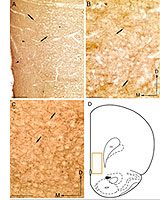 Acute (short-term) effects of cannabinoid receptor agonist administration include deficits in learning and memory, distorted perception, difficulty in problem solving and loss of coordination. Repeated administration (long-term) leads to increases in the activation of the stress-response system, anxiety, depression, cognitive impairment, and psychosis.

The question remains as to where cannabinoids act to induce cellular adaptations that may result in long term behavioral dysfunction. Preliminary data from our laboratories suggest that one potential target is the noradrenergic coeruleo-cortical pathway, a biogenic amine system involved in modulating higher cognitive function and mood. This system is implicated in setting the attentional mode, and is engaged as part of the stress response to facilitate arousal.

Our guiding hypothesis is that chronic cannabinoid administration results in a potentiated noradrenergic system that may contribute to the pathophysiology of affective disorders. Reports of the efficacy of cannabinoid antagonists in modulating monoaminergic function suggest that targeting noradrenergic transmission with this class of compounds may lead to novel therapeutic possibilities for the treatment of psychiatric disorders (e.g. depression and anxiety).

Go Back to Department of Neurological Surgery