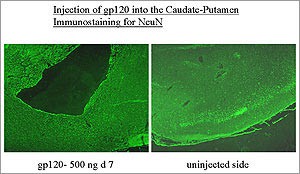 Human immunodeficiency virus type-1 (HIV-1) infection is the most common cause of dementia in adults younger than 40 years of age. In fact, many patients infected with HIV-1 suffer cognitive impairment, including subcortical dementia with psychomotor slowing, but also Parkinsonism and behavioral abnormalities including psychosis and depression. HIV dementia may result from neuronal death in the basal ganglia, cerebral cortex, and hippocampus. HIV-1 does not kill neurons by infecting them, but rather viral proteins released from infected glial cells, macrophages, and/or stem cells may kill neurons directly or may increase their vulnerability to other cell death stimuli. It has been suggested that the biochemical and molecular cascades by which neurons become dysfunctional and die in HIV dementia are similar to those that occur in Alzheimer's disease (gp120 and Tat initiating apoptosis, excitoxicity , and inflammation in HIVdementia while beta- amyloid protein could have a similar role in Alzheimer's disease).  Because antiretroviral agents are insufficient in the treatment of HIV dementia, neuroprotective (e.g., excitatory amino-acid receptor antagonists, antioxidants, and calcium-stabilizing agents) as well as anti-inflammatory approaches are necessary in addition to drugs that reduce viral load. On-going research projects involve 1) providing neuroprotection based on a SV40-mediated gene delivery of anti-oxidants agents (e.g., SOD, GPx , catalase ) to the brain regions more susceptible to the toxic effects of the viral proteins (striatum, hippocampus); and 2) developing a cell therapy approach by using bone marrow stem cells transduced in situ in vivo by a SV40-based vector, in order to study if the putative migration of these stem cells into the CNS and their differentiation under different circumstances (e.g., different growth factors, chemokines , cytokines), may allow them to replenish the cells that died after the viral injury.

Go Back to Department of Neurological Surgery