The Pediatric Measure of Participation (PMoP) is a child and parent reported outcome measure designed to evaluate participation of children with spinal cord injury and dysfunction (SCI/D).  The PMoP was developed and validated for children with traumatic and non-traumatic acquired SCI/D.   In the context of the PMoP, participation is defined as a child’s involvement in life situations across physical, social, spiritual, and virtual environments including home, school, and community.

During the early stages of PMOP development, the decision was made to create separate versions for children and parents, owing to the importance of obtaining both child and parent reported outcomes. The child and parent scales are different scales and provide different but equally important perspectives on outcomes of participation after pediatric SCI/D.

The PMoP is available as a child self-report for children with SCI/D age 8-21 and parent (or primary caregiver) report for parents of children with SCI/D age 4-21.  Because the two scales were developed separately and measure different constructs, scores from a child self-report and parent report cannot be compared.  While the child and parent scales contain the same number of items, each scale contains slightly different items.

Also, while the PMoP measures two different domains (self-participation and friend participation), each domain is a separate scale.   These two scales can be administered in isolation of each other or in combination but the scores cannot be compared.

A Short Form (SF) is a fixed (not dynamic) instrument that is administered via paper/pencil (or on a computer, but not using an adaptive approach).  It contains a small number of items (for example, 10-15) from the item bank that are thought to be highly relevant and that cover a broad range of abilities.  Because a SF is developed from the same calibrated item bank that is used for CAT, SF scores can be compared to CAT scores.  For example, if a CAT is administered at one point and a SF is administered to the same child at a second point, the scores from point one (CAT) and point two (SF) can be compared.

The PMoP is a patient reported outcome (PRO) instrument, in which children and parents read and respond to the items independently.  It is not to be administered or completed via interview.

Below are links to each PMoP SF and corresponding transformation table as well as a SF scoring guide.  All documents are PDFs.

The graphic below can help you determine the SF you need. 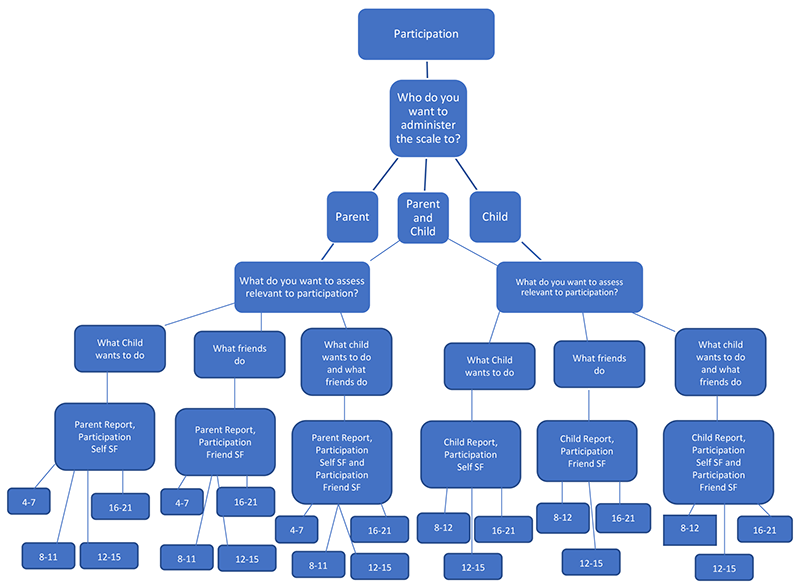