The Pediatric Spinal Cord Injury Activity Measure (PEDI-SCI AM) is a child and parent reported outcome measure of activity performance by children with spinal cord injury and dysfunction (SCI/D). The PEDI-SCI AM was developed and validated for children with traumatic and non-traumatic acquired SCI/D.  In the context of the PEDI-SCI AM, activity performance is defined as a child’s execution of complex functions; these functions represent specific tasks that can be done alone or with others.  It represents the individual perspective of function.

The PEDI-SCI AM assesses different aspects of the ability of a child with SCI to perform everyday activities.  It consists of activities organized into domains that assess a child’s functional abilities in General Mobility, Wheeled Mobility (Power and Manual), Ambulation, and Daily Routines.  Each domain includes items with a wide range of difficulty that are calibrated from least to most difficult using IRT methods.

The PEDI-SCI AM can be administered as a computer adaptive test (CAT) or as a short form (SF).  It is available as a child self-report for children with SCI/D age 8-21 and as a parent (or primary caregiver) report for parents of children with SCI/D age 4-21.  Because the two scales were developed separately and measure different constructs (child report of activity performance and parent perception of child’s activity performance), scores from the child self-report and the parent report cannot be compared.  In fact, the child and parent scales contain a different number of items and different items.

Also, while the PEDI-SCI AM measures four domains (general mobility, wheeled mobility, ambulation, and daily routines), each domain is a separate scale.  These four scales can be administered in isolation of each other or in combination, but the scores cannot be compared.

A Short Form (SF) is a fixed (not dynamic) instrument that is administered via paper/pencil (or on a computer, but not using an adaptive approach) and that contains a small number of items (for example, 8-10) from the item bank that are thought to be highly relevant and that cover the broad range of abilities. Because a SF is developed from the same calibrated item bank that is used for CAT, SF scores can be compared to CAT scores. For example, if a CAT is administered at one point, and a SF is administered to the same child at a second point, the scores from point one (CAT) and point two (SF) can be compared.

The PEDI-SCI AM SF is a patient reported outcome (PRO) instrument, in which the child or parent reads and responds to the items independently.  It is not to be administered or completed via interview.   The Daily Routines and Wheeled Mobility have separate SF based on if the respondent’s diagnosis of tetraplegia or paraplegia.

All documents are PDFs unless otherwise noted.

The graphic below can help you determine the SF you need. 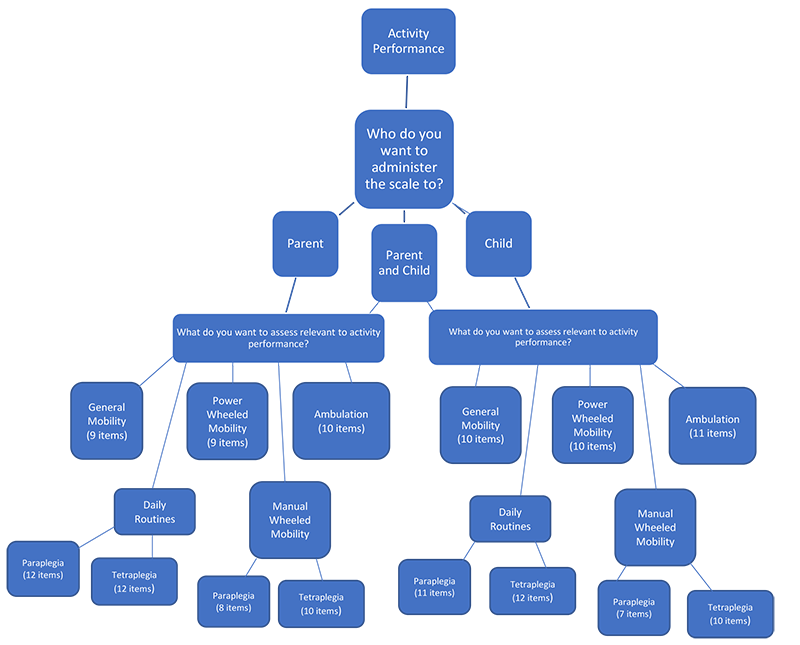