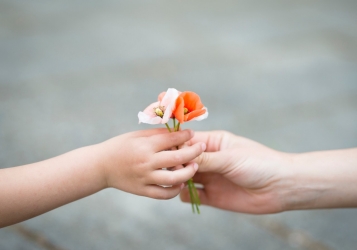 PHILADELPHIA – Mothers with opioid use disorder face many challenges as they work towards a more stable life for themselves and their children, depression not least among them. But medical interventions for depression can interfere with treatments for opioid addiction.

New research from Jefferson (Philadelphia University + Thomas Jefferson University) shows that participation in a mindfulness-based parenting intervention may reduce depression symptoms for mothers in treatment for opioid use disorder. The work was published in Issues in Mental Health Nursing May 17.

Mindfulness, a kind of meditation practice in which participants reflect on the present moment without judgment, has been shown to decrease stress and anxiety as well as depression in the general population. In other studies, mindfulness also improved depression symptoms in parents of children with autism, parents of children with severe medical needs and parents of challenging adolescents. Brought to Jefferson’s MATER (Maternal Addiction Treatment Education & Research) program by its current director, Diane Abatemarco, PhD, the practice is thought to facilitate improved well-being by focusing on the present, thereby breaking cycles of negative thought brought about by dwelling on the past or worrying about the future, which can lead to stress and anxiety.

Researchers examined whether a mindfulness-based parenting intervention could help mothers in treatment for opioid use disorder. “The women treated through the MATER program at Jefferson have often experienced a number of traumatic events in their lives, or are dealing with ongoing traumas,” says first author Karen Alexander, RN, PhD, an Assistant Professor in Jefferson’s College of Nursing. “We suspected that learning to put aside the parts of their lives that they can’t control, and focusing on the present, where they do have agency, could help these women with psychosocial needs that medications alone cannot address.”

On a more basic level, the research team also wanted to test whether the intervention was a feasible goal for patients who are typically juggling a number of competing stresses. “We knew a mindfulness-based intervention could be beneficial, but we didn’t know if it would be doable for this population,” says Dr. Alexander.

As part of the "Practicing Safety Mindfulness Project for Mothers in Drug Treatment,” funded by the Department of Health and Human Services, women were recruited who were receiving methadone for opioid use disorder and who were at least 28 weeks pregnant or the mother of a child under three years old. Women could choose to enroll in the intervention program or participate in the control group.

Women in the intervention attended a two-hour mindfulness-based parenting class every week for 12 weeks. Two mindfulness-based stress reduction educators and a therapeutic counselor ran the classes and childcare was provided during the sessions.

In class, women practiced meditation, participated in group discussions, and built skills related to self-care and parenting. They learned communication skills as well as parenting techniques. Educators also helped participants form realistic expectations for the developmental age of their children.

Participants’ children joined in for three of the classes and engaged in mindful play. During these sessions, instructors offered parenting feedback and positive guidance. At the end of the 12 weeks, a celebration recognized participants’ commitment to self-care and healthy parenting.

“This was a really great intervention to be able to address the mental health needs of these moms without adding in pharmacology,” says Dr. Alexander.

The results show a mindfulness-based parenting intervention is a practical alternative to pharmaceutical treatment that can alleviate depression symptoms in this population.

“More comprehensive approaches need to be tested,” says senior author on the study Dr. Abatemarco, who is also a professor in the departments of OB/GYN and Pediatrics at Sidney Kimmel Medical College. “Rather than presuming medications alone can treat opioid use, we need to look at behavioral treatment options as well.”

The original primary study was funded by the Department of Health and Human Services, Children’s Bureau (Grant Award no. 90CB0190).