A brain cancer vaccine more than 20 years in the making suspends cancer growth in patients enrolled in early-stage trial. 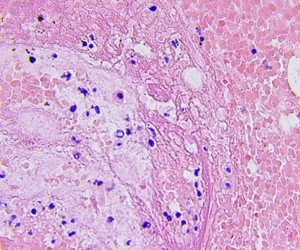 PHILADELPHIA – Glioblastoma is the most aggressive type of primary brain cancer, one with a prognosis of 11 to 15 months with standard treatment. Results from a phase 1b clinical trial of a new experimental glioblastoma vaccine developed by Jefferson and Imvax, show the treatment was tolerated well by patients, slowed tumor recurrence, and prolonged patient survival.

The research was presented at an oral session of the American Association for Cancer Research (AACR) annual meeting on March 31, 2019 in Atlanta, Georgia.

“The response we see in some patients is very encouraging,” says David Andrews, MD, Professor of Neurosurgery at the Vickie & Jack Farber Institute for Neuroscience – Jefferson Health and co-founder, Chief Medical Officer and interim Chief Executive Officer of Imvax. “We look forward to initiating a phase II trial later this year to confirm these phase 1b results.”

The vaccine is created from the patient’s own tumor cells sampled during surgical removal of the primary brain tumor. Researchers first take the cancer cells, treat them with an antisense oligodeoxynucleotide (AS-ODN) against IGF-R1, a receptor shown to drive tumor growth and metastasis, and load them with additional AS-ODN into diffusion chambers. Then the dime-sized chambers and their contents are irradiated and implanted under the skin of the patient’s abdomen.

“As a consequence of the combined effects of the IGF-1R antisense and irradiation, our evidence shows that the chambered tumor cells release antigens, which together with the immunomodulatory AS-ODN, diffuse out of the chamber into the patient’s body and activate the immune system against brain tumor cells,” says immunologist D. Craig Hooper, PhD, a Professor of Cancer Biology at the Sidney Kimmel Cancer Center – Jefferson Health and a co-founder and Chief Scientific Officer of Imvax.

As a nationally renowned neurosurgeon treating glioblastoma patients for decades, Dr. Andrews was frustrated with the poor options for treatment in glioblastoma. He was interested in using antisense molecules, ones that render glioblastoma cells more susceptible to conventional radiotherapy. However, preclinical experiments and an early clinical study of the effect of implantation of diffusion chambers containing glioblastoma cells showed there was radiographic evidence of delayed tumor shrinkage. This delay suggested that a systemic, possibly immune response may be at play. To better understand the observations, Dr. Andrews reached out to Dr. Hooper, who has an extensive background in studying immune regulation and particular expertise in neuroimmunity.

Over the course of fifteen years, translational research led by Dr. Hooper and clinical studies led by Dr. Andrews refined the diffusion chamber combination product used in the current phase 1b trial.

The phase 1b clinical trial builds on earlier work showing that standard-of-care treatment for glioblastoma damages the immune system and suggesting that the vaccine would be more effective in patients whose immune systems had not been compromised by prior therapy. The phase 1b trial only enrolled patients who were scheduled to have surgery, prior to the start of standard-of-care adjuvant therapy.

The study enrolled 33 patients between September 2015 and March 2018. The study participants were divided into four groups treated at various doses of vaccine, ranging from 10 chambers for 24 hours at the minimum dose, to a maximum of 20 chambers for 48 hours. Patients were followed for a median of 13 months (ranging from four to 39 months).

The results showed that patients who received the Imvax glioblastoma vaccine had longer progression-free survival and overall survival – two common measures of cancer treatment success – than the control group. The researchers saw no vaccine-related adverse events. The median prognosis, or overall survival, for patients treated with the highest dose of the vaccine was 21.9 months, compared to 14.6 months for standard of care. Median progression-free survival was 10.4 months for the highest dose vaccine, significantly higher than the 6.9 and 5.4 months in published standard of care studies.

"This is creative collaboration at its best. We have physicians challenged with the limitations of medicine who therefore reach out to basic researchers in order to brainstorm potential solutions,” says Robert Rosenwasser, MD,MBA, President and CEO of the Vickie & Jack Farber Institute for Neuroscience. “This is the reason academic medical centers like Jefferson excel with innovations that improve lives. The depth of cellular and molecular knowledge in bench science generates the design of treatments that are most likely to succeed. When basic laboratory science and clinical research come together with a passionate need to improve the lives of our patients and families, we develop incredible advances in treatment paradigms.”