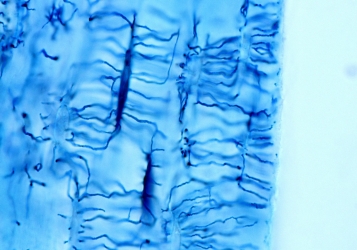 A subpopulation of bone cells releases factors that can halt the growth of breast cancer that’s traveled to the bone, putting the cells in stasis.

PHILADELPHIA -- In breast cancer, there are cases of women and men whose cancer returns in their bones 20-30 years after they were treated for their primary disease and thought they were cancer-free. This phenomenon always puzzled Jefferson researcher Karen Bussard, PhD. How is it possible that breast cancer cells from a primary tumor are able to reach the bones when a patient is deemed “cancer-free” after treatment?  What was happening in bones that allowed the cancer cells to remain there for up to 30 years, alive but in a sleeping state, only to re-awaken decades later?  In a step towards answering these questions, Dr. Bussard recently discovered a type of bone cell that can subdue cancer cells, slowing their growth, even in one of the most aggressive types of breast cancer: triple negative.

The results, published in Breast Cancer Research, raise intriguing questions about how these bone cells exert their sleep-inducing influence, and whether it’s possible to replicate and permanently turn cancers dormant.

“Cancer has this uncanny ability to turn other cell types it comes in contact with to the cancer cell’s advantage,” says Dr. Bussard, Assistant Professor of Cancer Biology at Thomas Jefferson University and a researcher at the Sidney Kimmel Cancer Center -- Jefferson Health. “For example, cancer cells can turn the immune cells that should kill it, into its own guards. However, we have now found a population of bone cells that not only resists, but subdues the cancer. It’s fascinating.”

Together with co-first authors and graduate students, Alexus D. Kolb and Alison B. Shupp and others, Dr. Bussard probed how bone cells change once they interact with breast cancer cells in the bone. Specifically, they looked at osteoblasts - a kind of bone cell that lays down new bone, like cement, during growth and repair.

The research team showed that the osteoblast cells from mice as well as humans drastically changed their function after interacting with bone-metastatic breast cancer cells.  Earlier studies had shown that in advanced stage bone-metastatic breast cancer patients, osteoblasts stopped working; failing to produce a matrix that stabilizes and strengthens bone. The changes lead to loss of bone density that is common in these patients. In her new work, Dr. Bussard and colleagues showed that in earlier stages of the disease, when cancer cells first enter the bone, rather than producing new bone, osteoblasts may divert their energy toward producing factors to halt cancer cell growth.

“The bone-building osteoblast cells have a complex relationship with cancer,” says Dr. Bussard. “In advanced stages of the disease, we know that metastatic breast cancer cells can co-opt the normal cells of the bone to help cancer metastases thrive. However, our new work suggests that during early stages of the disease, such as when metastatic breast cancer cells first migrate to the bone, these cancer-exposed osteoblasts resist and fight cancer growth.”

The next step, says Dr. Bussard, is to fully characterize the molecules that osteoblasts use to reign in cancer growth, and see whether it’s possible to turn that understanding toward treatments that can put cancer cells to sleep forever.

The research was supported by NIH grant number R00CA178177, Commonwealth of Pennsylvania – Department of Health SAP 4100072566, and the Sidney Kimmel Cancer