Was Leonardo Da Vinci’s Dyslexia Responsible for His Brilliance? 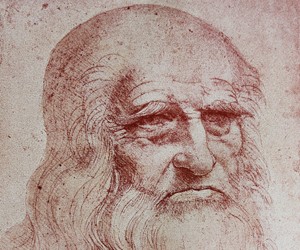 The Renaissance man’s spelling problems may have aided his artistic genius.

PHILADELPHIA – May 2 marked the 500th anniversary of Leonardo da Vinci's death, and has prompted a revisiting of the life of a man considered by many to be the most creative person ever. He is one of the most legendary artists, inventors and outside-the-box thinkers in history. Researchers argue that da Vinci’s likely dyslexia may have contributed to the Renaissance man’s creativity and artistic skills.

“Dyslexia is probably one of the things that made da Vinci so creative, made him Leonardo,” says Salvatore Mangione, MD, associate professor in the department of Medicine at Sidney Kimmel Medical College—Thomas Jefferson Universary. Dr. Mangione’s article on the topic published in The American Journal of Medicine.

Dyslexia is a misunderstood learning difference that affects about 20 percent of the population. People with dyslexia have difficulty reading despite having the intelligence, motivation and opportunities necessary to learn. The condition often affects a person’s ability to appreciate the individual sounds of a language. As a result, people with dyslexia have trouble learning phonetically, which impacts reading, writing and spelling.

Yet, the possibility that da Vinci might have been dyslexic shows that what society considers a disability may have actually been a gift for da Vinci, says Mangione. Indeed, research shows people with dyslexia are highly creative.

“People have been trying to understand what made Leonardo tick,” Mangione says. “Unfortunately, the man didn’t really tell us much about himself.”

Yet, one thing researchers do know is that the Renaissance man did not do well in school. His earliest biographer on record – Giorgio Vasari – attributes da Vinci’s mediocre academic record to ‘doodling’. Vasari suggested da Vinci might have done better in school if he had paid more attention to his letters rather than giving in to the distraction of drawing. Mangione found da Vinci’s lack of scholarly prowess intriguing. “It suggests the possibility of dyslexia,” he says.

Another hint that the polymath might have been dyslexic is that da Vinci was a terrible speller. “If you look at his notebooks, the orthography – the set of norms for writing a language – is a mess,” Mangione says. Indeed, spelling errors riddle his notebooks. “Leonardo had many as nine different ways of writing the same word,” Mangione says. Da Vinci also had a habit of creating new words that sounded the same as the real word. For instance, he would have written the word “rain” as “rane.” Almost half of da Vinci’s misspellings are in fact homophonic non-words.

A recent analysis of six portraits of Leonardo’s face in paintings, drawings and sculptures suggested da Vinci might have also had misaligned eyes. If the eyes are not completely aligned, a condition known as strabismus, 3D vision is impossible. This misalignment forces the brain to use one eye over the other and as a result produces 2D vision. “The funny thing about having 2D vision is that it makes you a much more talented visual artist,” Mangione says. Indeed, introductory drawing classes often advise students to close one eye to help translate a three-dimensional object onto the 2D page. Hence “the condition lends itself to skill in visual art but is also associated with dyslexia,” Mangione says.

The realization that da Vinci might have been dyslexic sheds light on both the artist and the condition. “The possibility that da Vinci had dyslexia, which we can never truly know of course, illuminates how complex and poorly understood the condition is,” Mangione says.

“We live in a society where the verbal trumps the visual,” according to Mangione, which can lead to misconceptions about people with learning differences such as dyslexia that have lasting consequences. Kids who have trouble reading, report feeling angry, distractible and unpopular. By high school, they are two and a half times more likely to drop out than students who do not struggle with reading. Yet, research shows people with dyslexia are smart, creative and resourceful thinkers who draw on different parts of their brains to read than typical readers.

“So let’s not label these kids and penalize them for actually having a different brain,” Mangione says. For da Vinci, the condition might have actually been a gift.